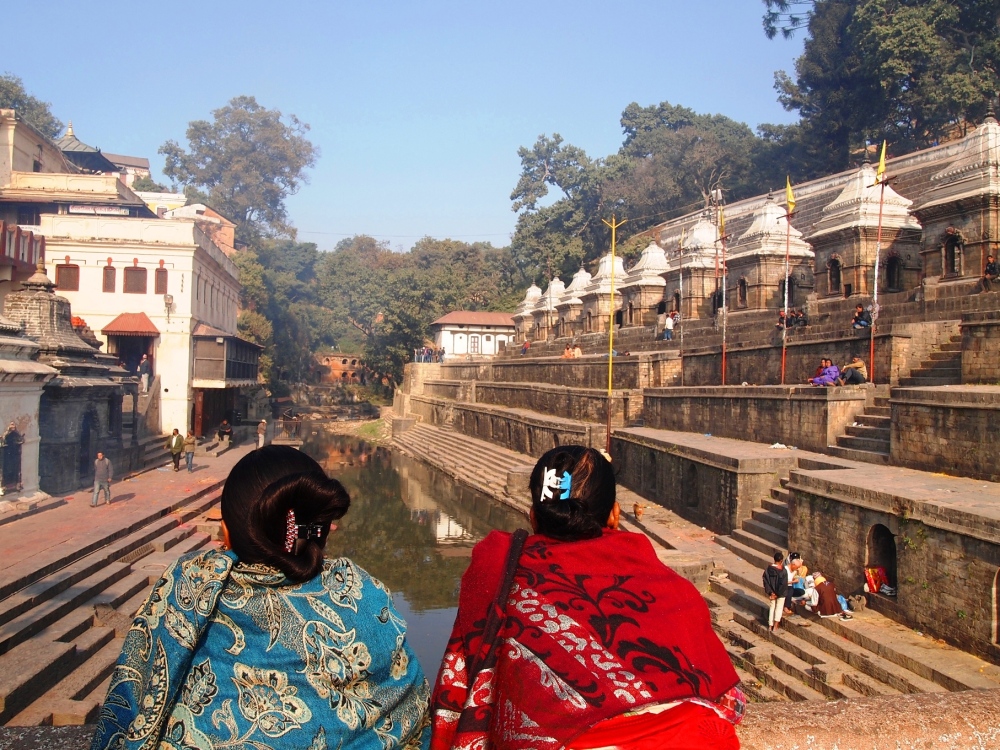 The smell of the dead body burning right across the river will make you notice. You covered your nose and blink your eyes trying to see the ritual behind the smoke now clouding the area.

No matter how strong the smell was, for some hypnotic reason, you gravitate towards the burning. Then you see, whatever left of the body inside the orange rob was either swept towards across Bagmati river or now part of the air you breathe.

This is Pashupatinath Temple at Kathmandu.

Designated as UNESCO World Heritage site, considered as one of the most important and most sacred Hindu temple of Lord Shiva, the temple was said to be built dating back 400 A.D., though no confirmed information on when it was actually built or where and how the Lord Shiva made his way to the area.

The main temple houses the sacred linga or holy symbol of Shiva, making it forbidden for non-born Hindus to enter.

Pashupatinath Temple architecture is distinctive Nepalese style pagoda. It is an extensive complex consisting of many other old and important temples and statues, making it a worthy visit even for non Hindus.

Within the temple ground, it is normal to see several man (Sadhu) covered in a plain piece of clothing with white powder spread all over their body. They lazily gaze at the space between them, unfazed by all the movement around, as if they are on a different dimension from the rest. Are they the one who dedicated their lives abolishing their earthly desires?

I continue to wonder inside the temple grounds, amazed by the rituals and the repetitive stone Shiva temple, which if I’m not alone will be nice to play hide and seek with.

And then there was this man.

I took the opportunity to photographed him as quickly as possible just when he was climbing down the stairs. After a few seconds, I realize that I made a huge mistake. He is one of those who dressed up and benefited on places like Pashupatinath for unsuspecting tourists like me. Everything that he was is an act, a costume, and the bucket he was holding contains nothing but his Nokia mobile phone.

In perfect English languange, he shouted at me “Hello, Hello. Give me 100 Rupees”. I tried to ignore him and pretend I did not hear anything, but he continued to follow me and demanded his rupees in a very threatening way. I gave up, gave him 20 but he still insist for a hundred, I ignored him and walk a way.

The burning area and the stone stupas are connected by a bridge over the sacred Bagmati river, which serves as a perfect vantage point to admire the chaos, the strange and the serenity that is Pashupatinath all together.
Passing by I heard a loud chanting, I tried to locate the source of the sound but failed to find it.

After sometime, following the others lead, I quietly sat down at the stone steps(ghat) right across Bagmati River and the burning ceremony area.

After all, Pashupatinath Temple demands more than anything for someone to absorb and not to admire, to understand and not to be amazed of the inevitable truth that at one point or another all of us are nothing but ashes.