If there is one image that entice every visitor from around the world to visit the tiny South Asia nation of Sri Lanka, it has to be Sigiriya, the enigmatic image of a rocky outcrop towering over the surrounding green plains.

Often referred to as the “8th Wonder of the World”, the UNESCO World Heritage Ancient City of Sigiriya is a rock fortress that requires visitors to climb 750 steps to reach the citadel summit. 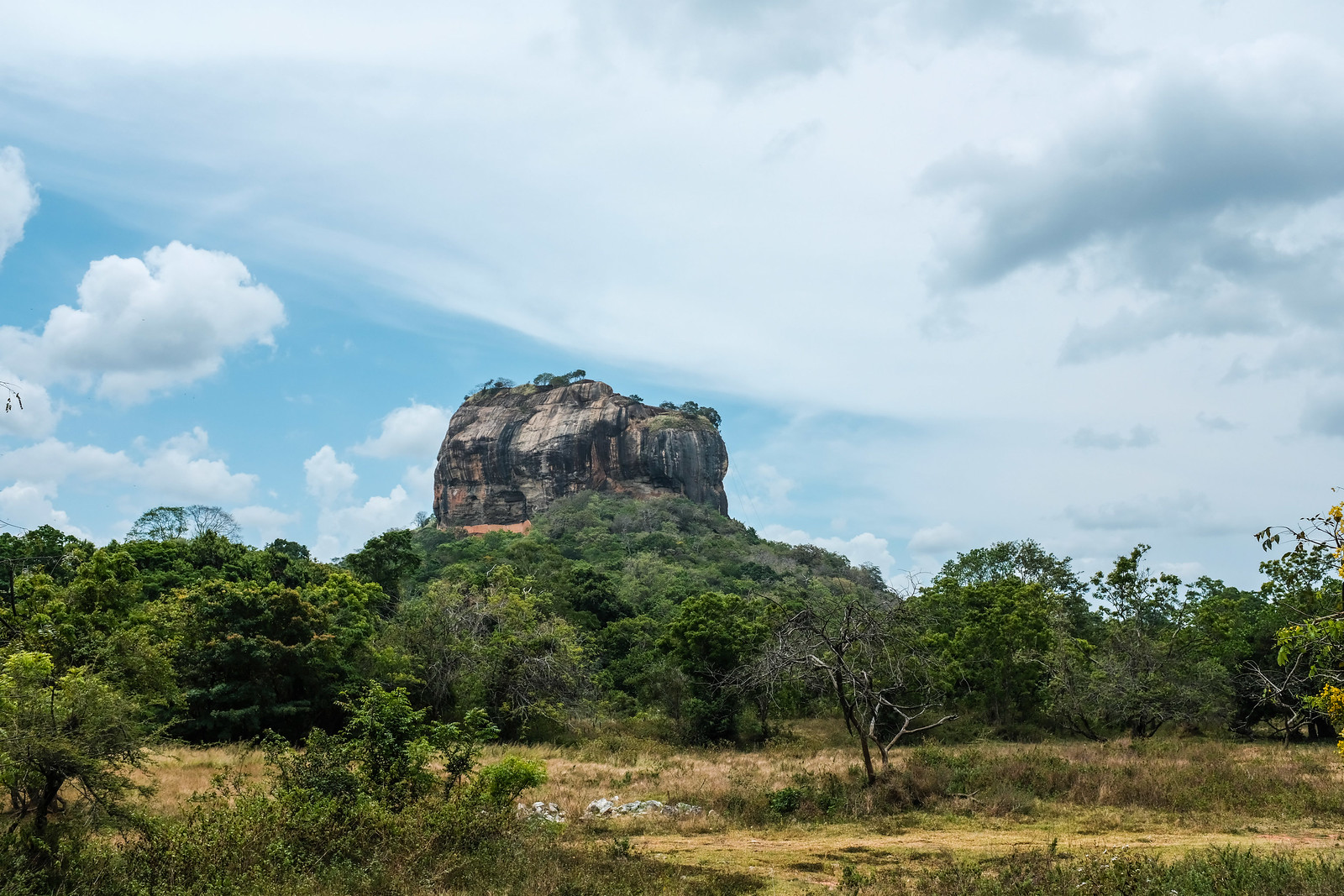 Like any other similar sites in the world, a bit of a planning is needed when visiting Sigiriya. Some chooses to stay overnight at the town itself, timing their ascend to the citadel during sunrise or sunset, while others stayed at nearby town of Dambulla and its famous cave temple. I skipped both options and stayed at Kandy instead, then make both Sigiriya and Dambulla a day trip affair.

Whether you are staying at the nearby town or coming from far-out town, it is advisable to time your ascend before noon, as the weather can be unforgivingly hot and taking on the steps to reach the 200m high summit can be challenging at times. Make sure to dress comfortably, bring enough water and allocate a good 2-3 hours for your visit.

As of April 2018, the entrance fee is LKR4 770 (30 USD) for foreign visitors and this include access to the adjacent Archaeological Museum. Keep your ticket with you at all times, as there are points of inspections along the way. 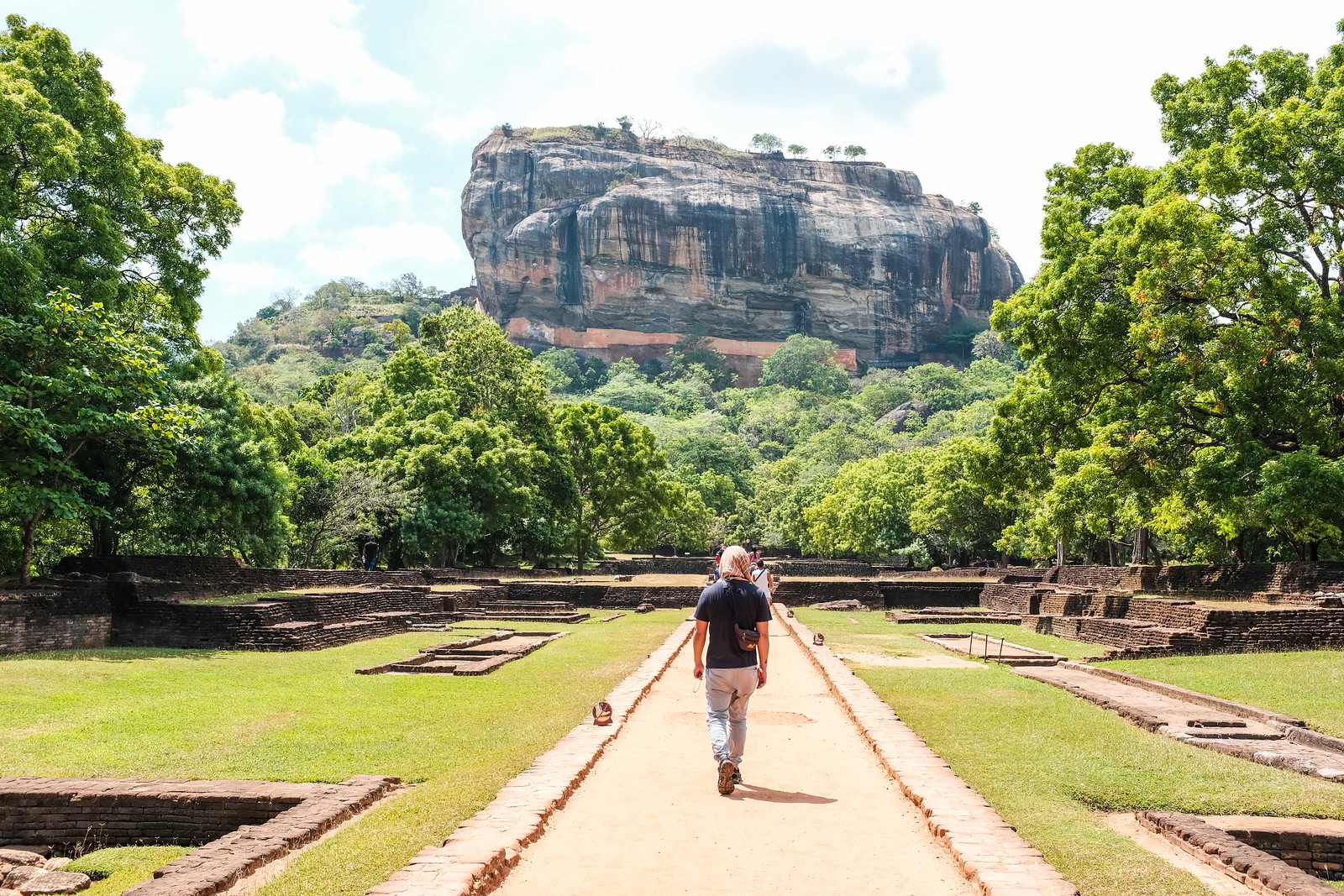 You can sense the excitement of every visitors, seeing the distant rock situated in the middle of a straight pathway from the main public entrance. The main pathway is part of the Royal Gardens, running along East-West axis, with the ancient rock as its focal point.

The grounds of the Ancient City of Sigiriya is vast; a complex network of ponds, canals, alleys and halls, showcasing what remains of the capital built by parricidal King Kassapa I.

The first part of the ascend are just a stone staircases that are manageable to navigate, but the path began to scale up after passing by the two huge boulders at the Boulder Gardens. 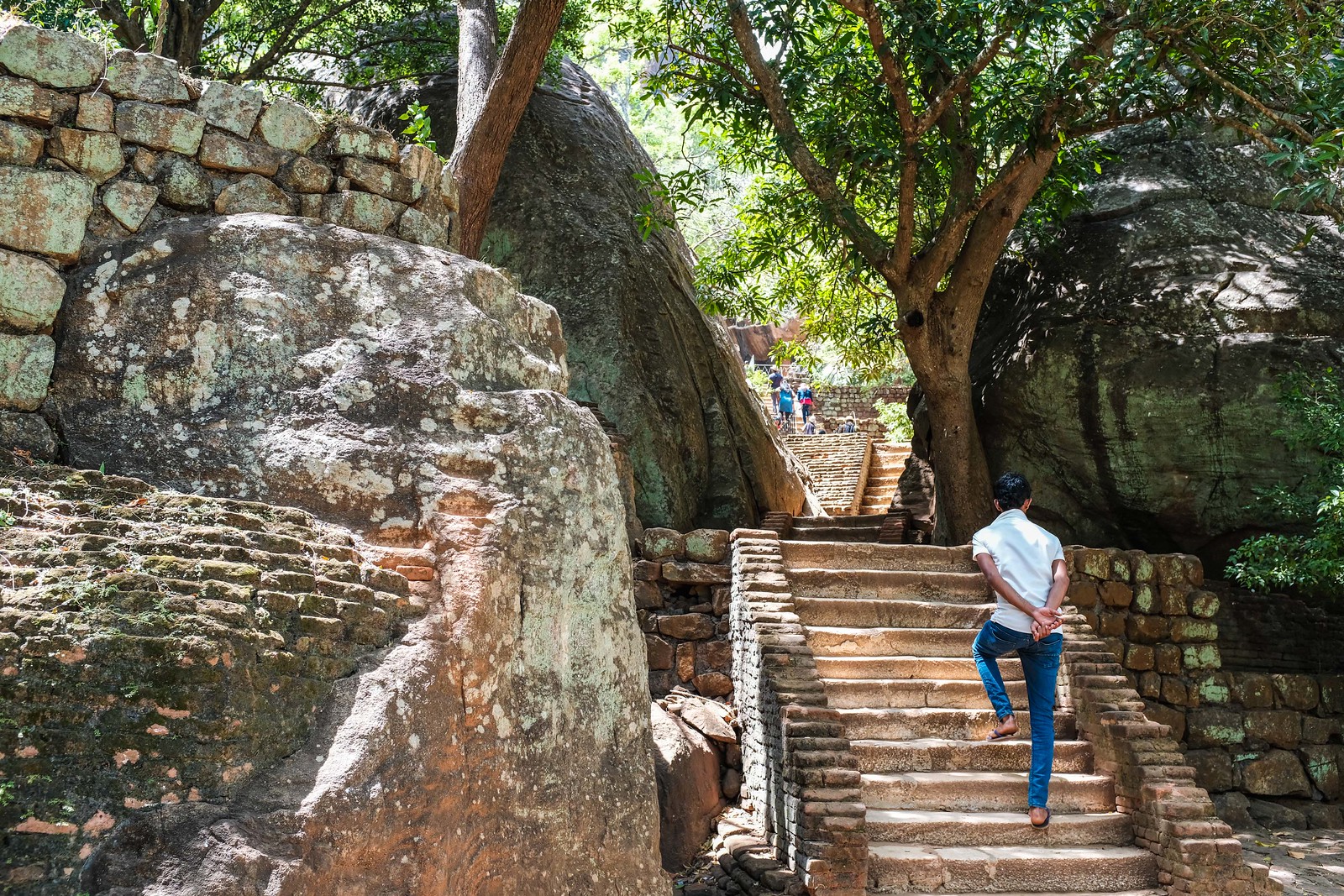 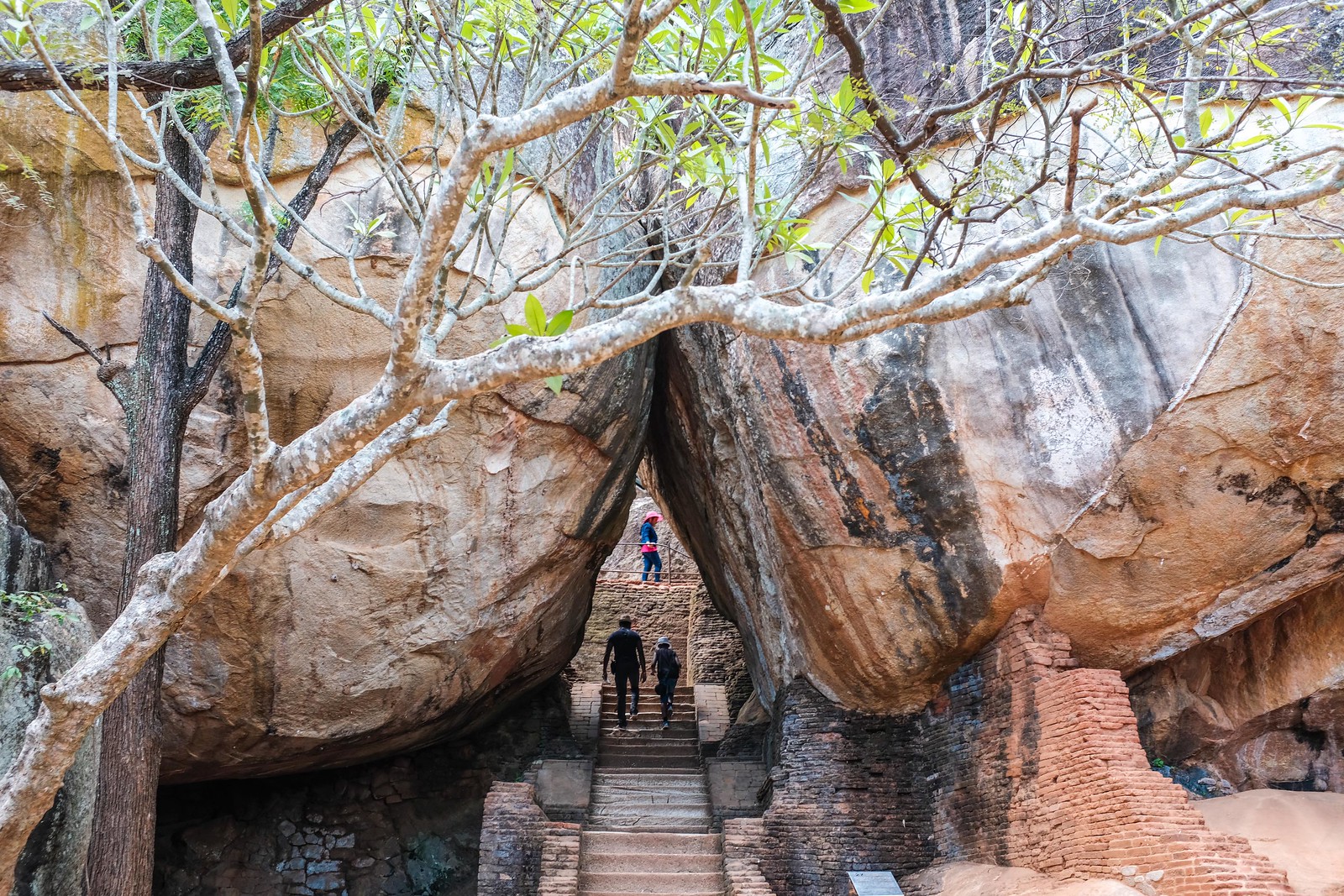 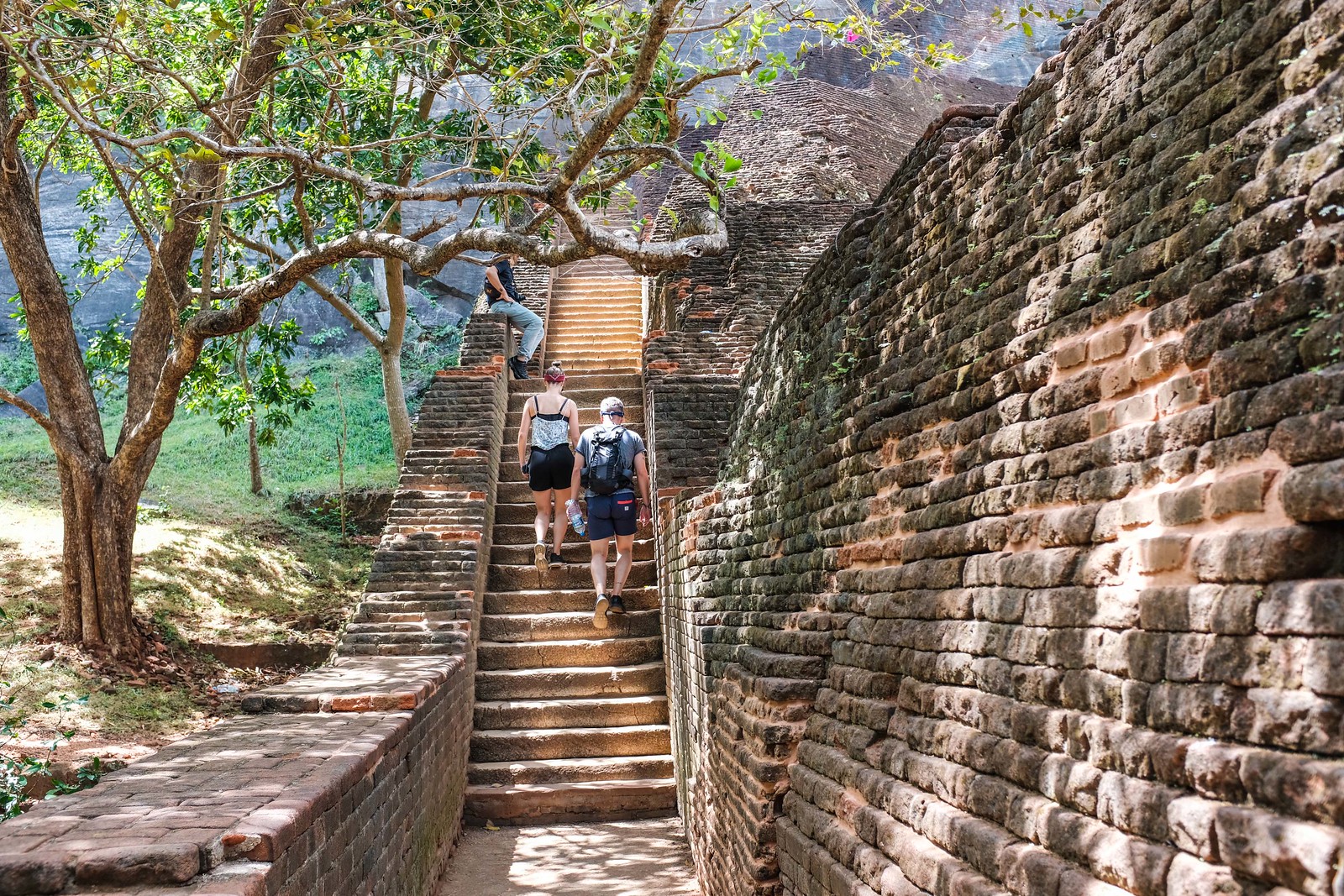 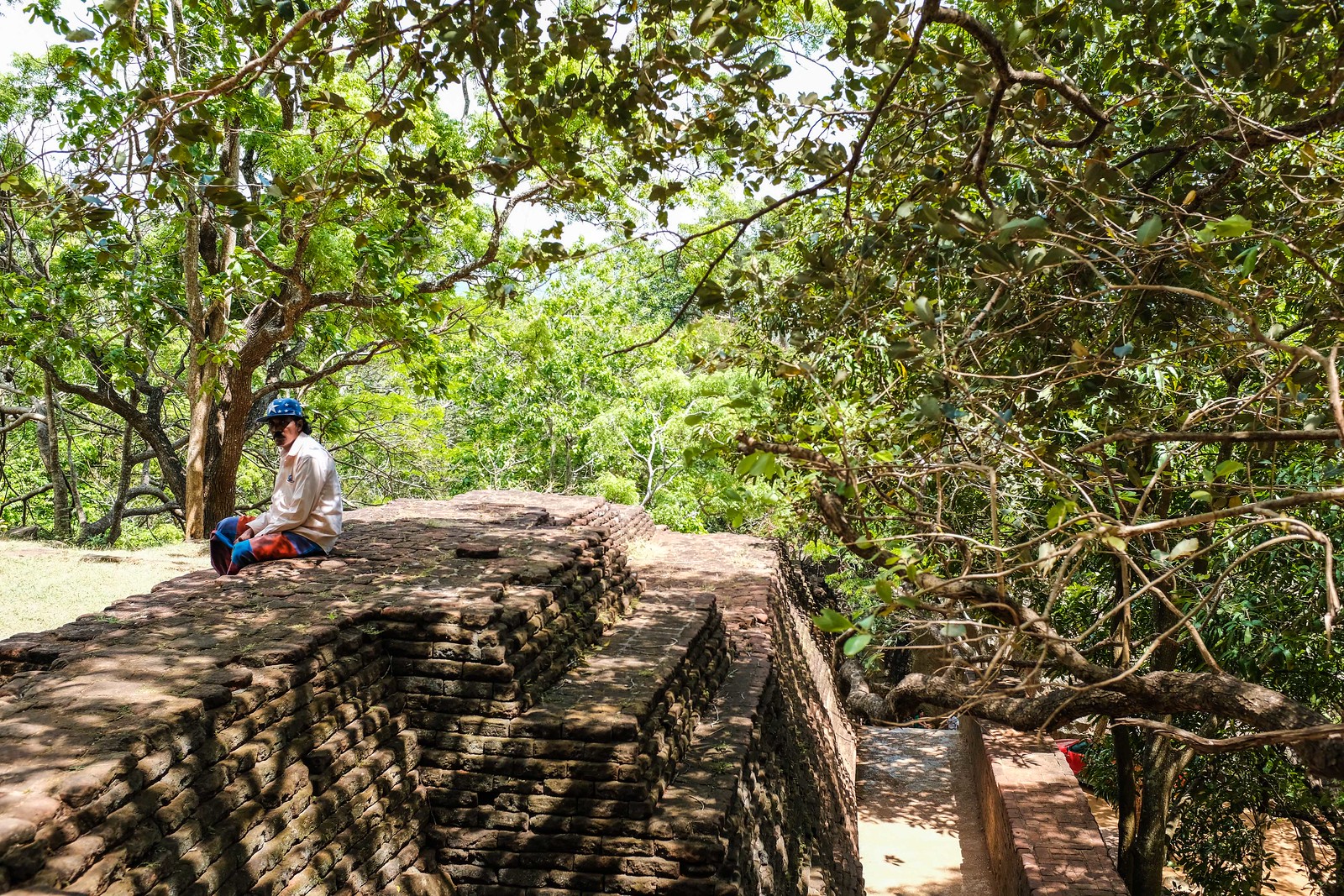 Afterwards, you will get your first glimpse of the natural beauty that surrounds the ancient citadel. As a precautionary measure, it is important to make minimal noise when ascending up to the rock, to avoid provoking the wasps that are nesting behind the rocks. 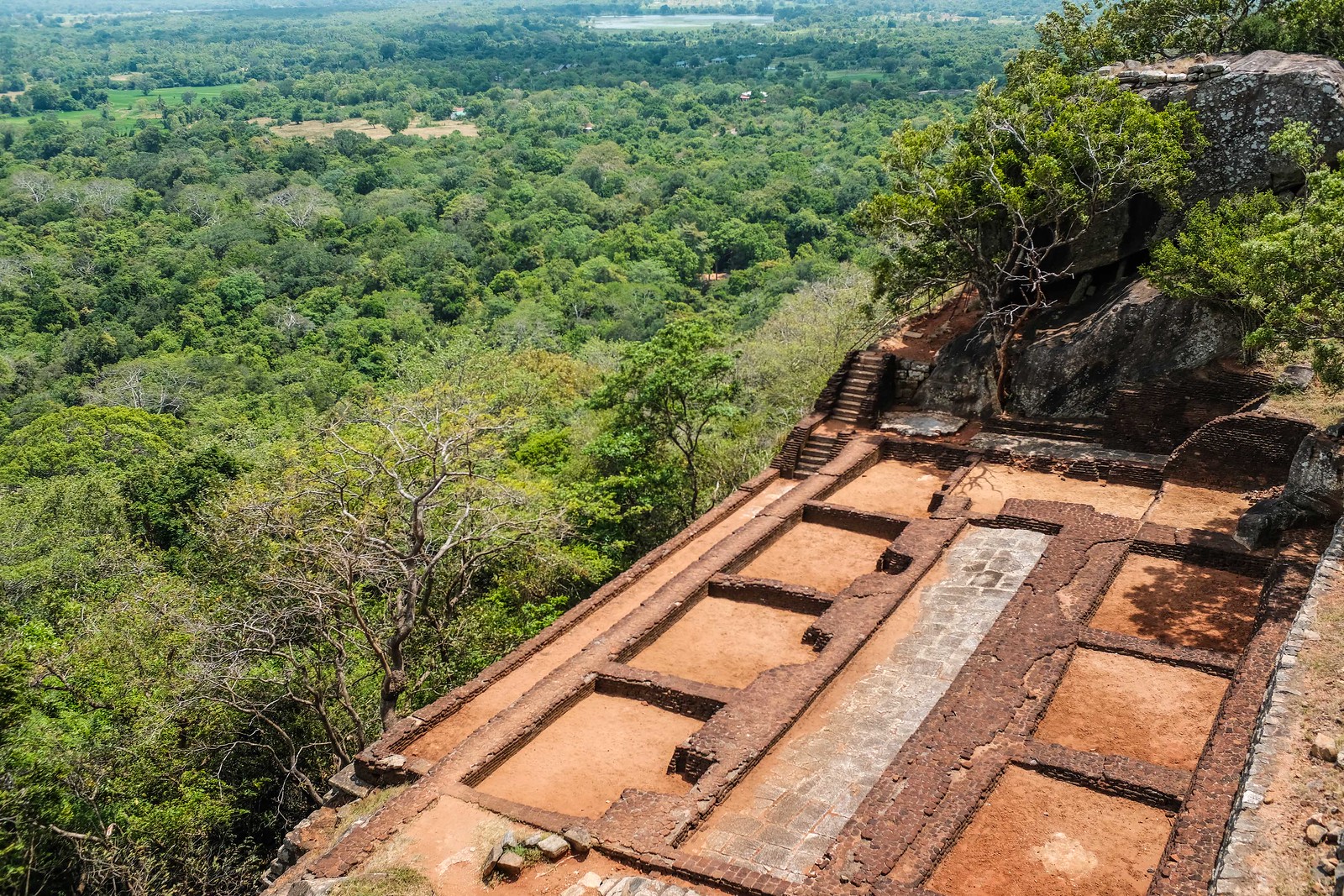 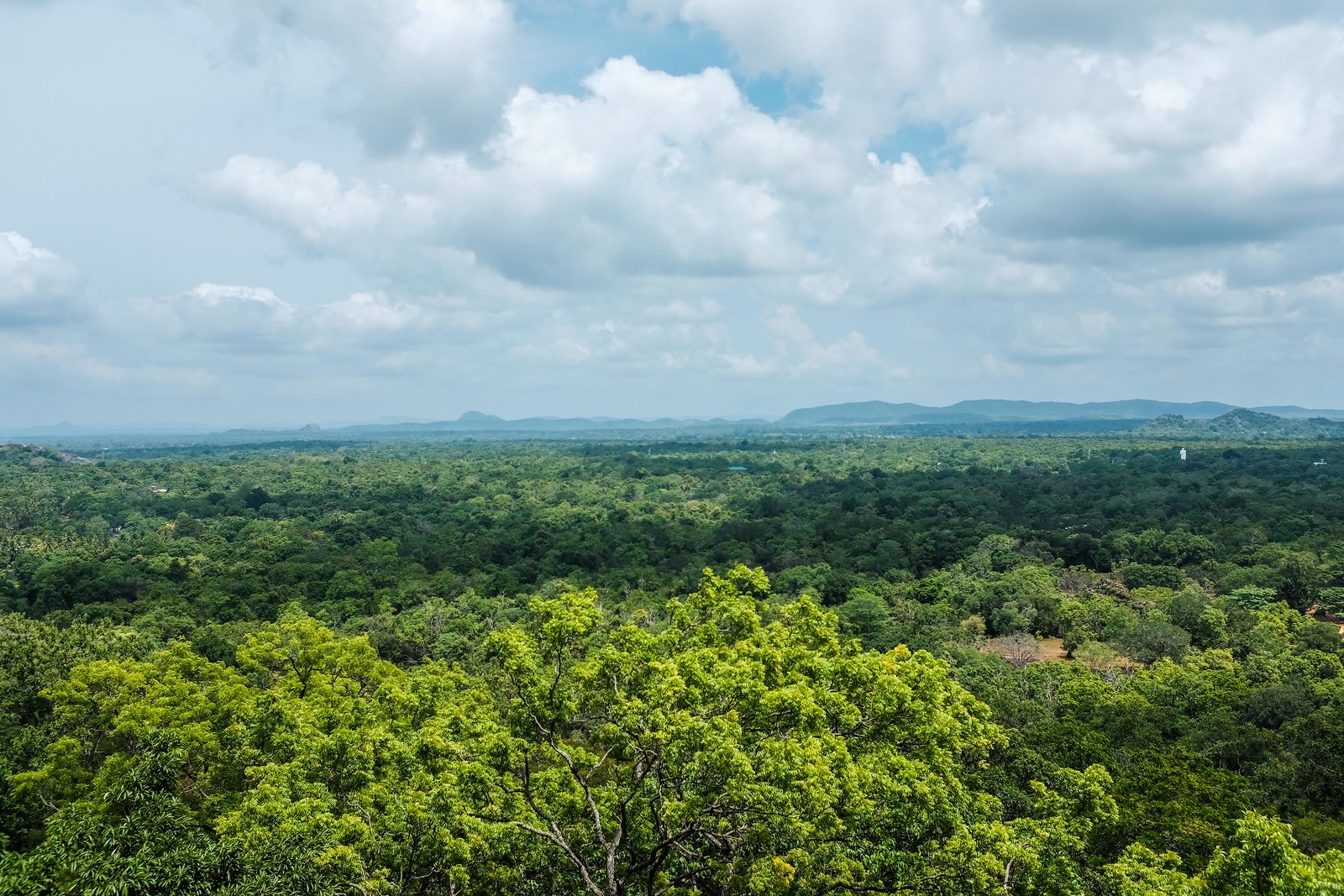 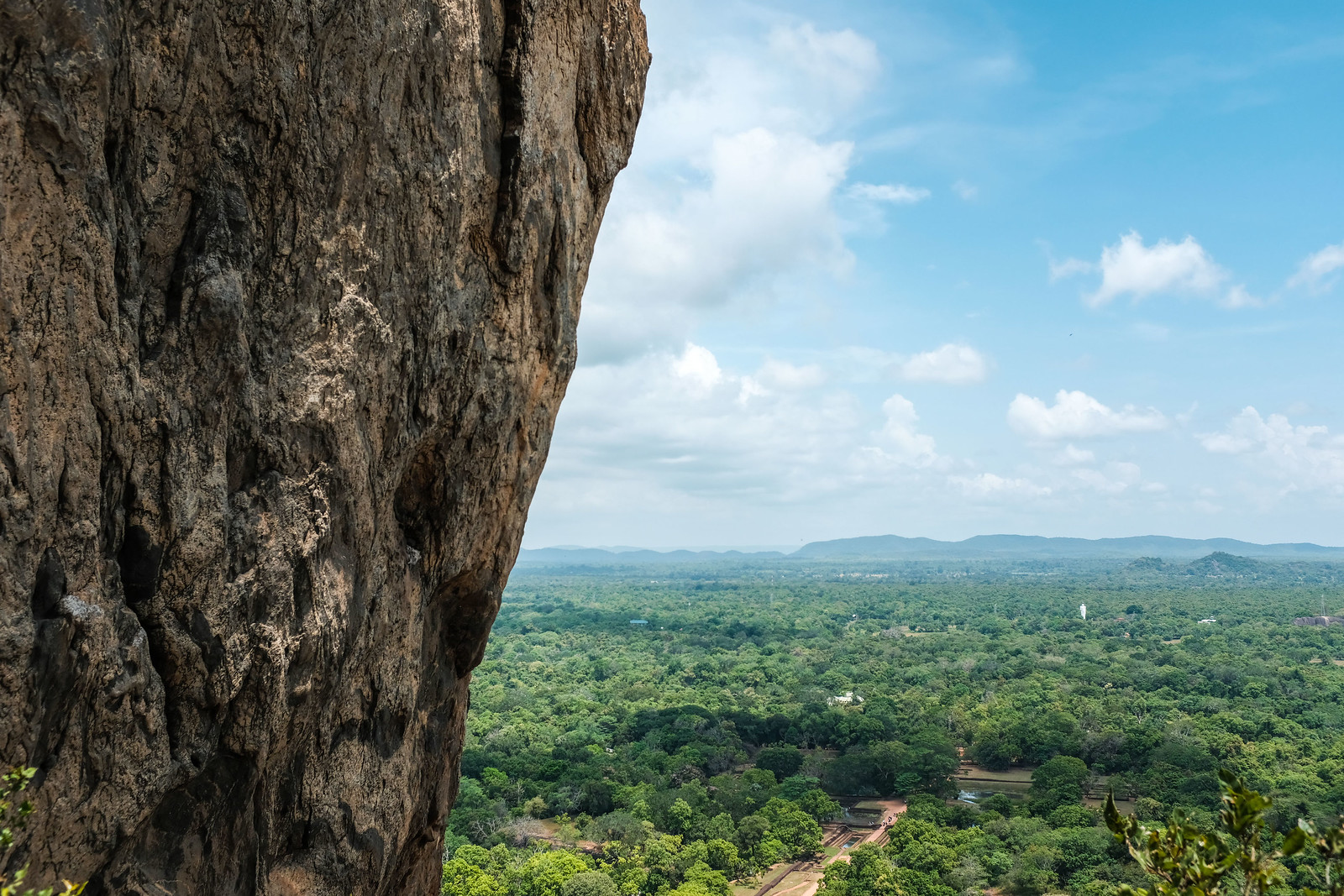 Further ascend via the metal staircase with mandatory stopover at the Cobra Hood Cave to admire the ancient frescoes called Sigiriya Damsels, where photography is not allowed. Past the frescoes, the pathway up run along the face of the rock, bounded on one side by the Mirror Wall.

The Mirror Wall may not be much to look at these days, but it said to be a treasure trove of 1,500 ancient graffiti, with poetry like scribbles about art and appreciation of female beauty. 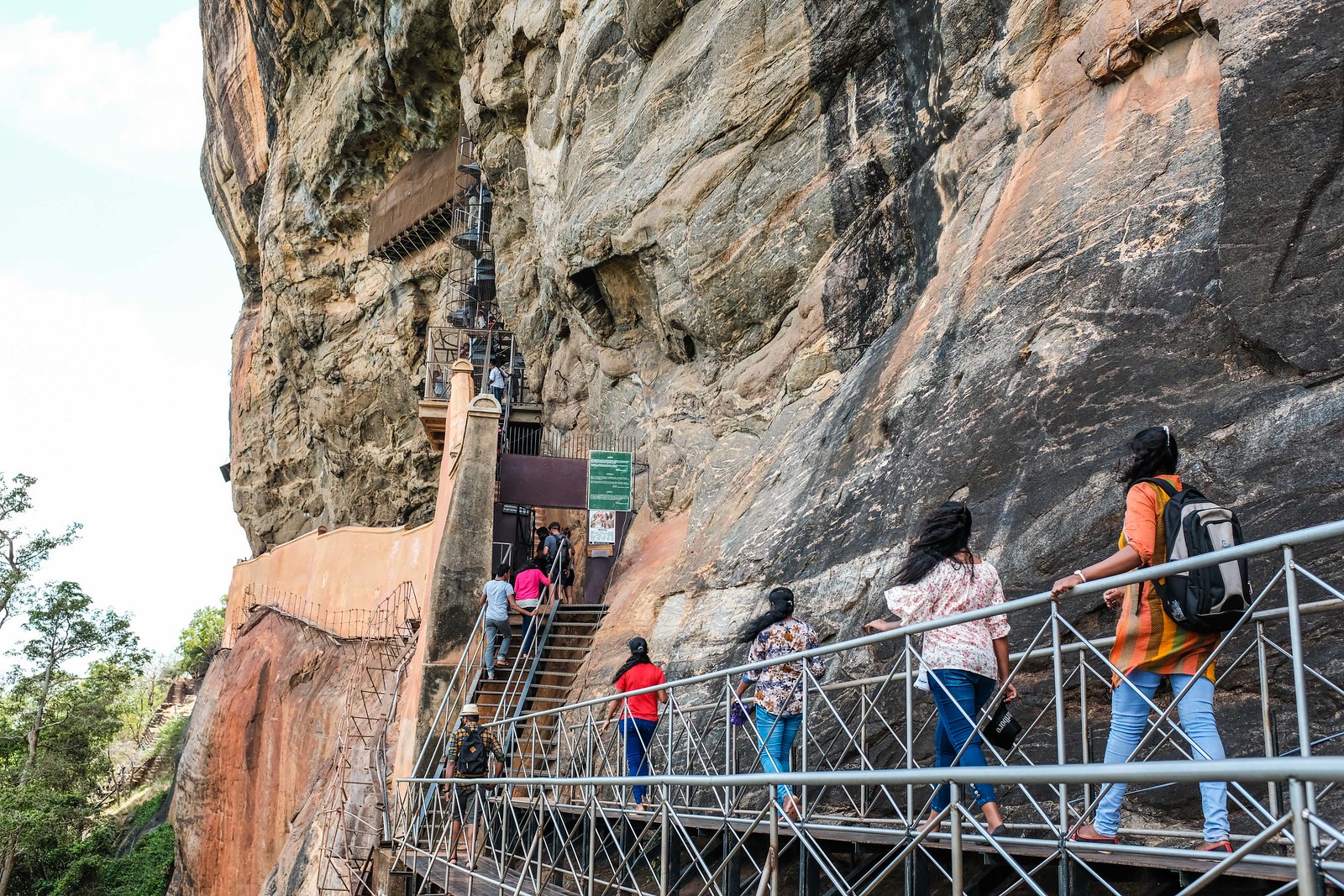 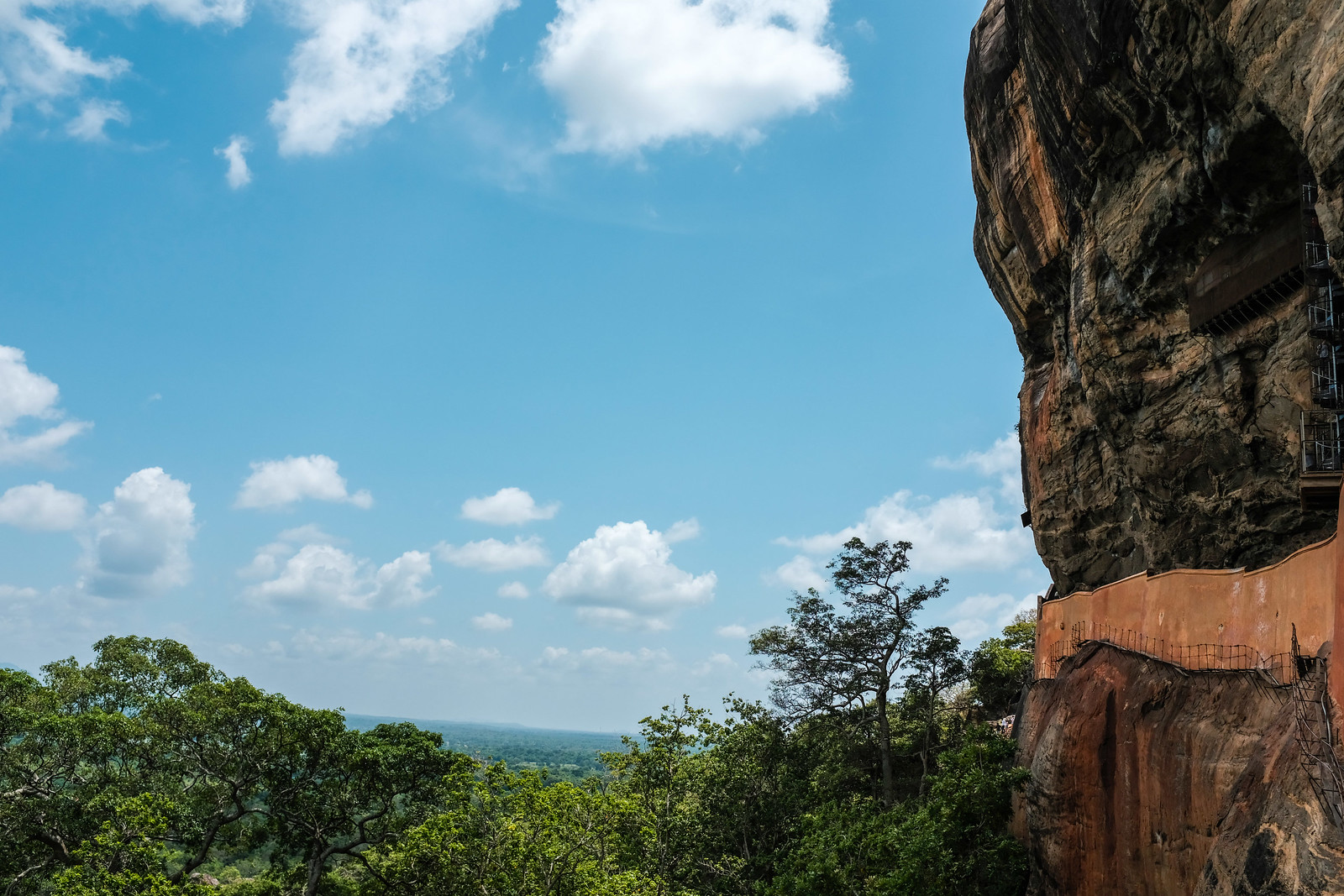 Sigiriya, also known as the “Lion Rock”, mainly derive its name from the gigantic lion statues that you will see at the final part to the summit. The lion’s head is no longer visible, but two enormous lions paws carved out of the rock are still there, reminding everyone of what Lion means in Sinhalese culture- emblem of royalty, prestige and power. 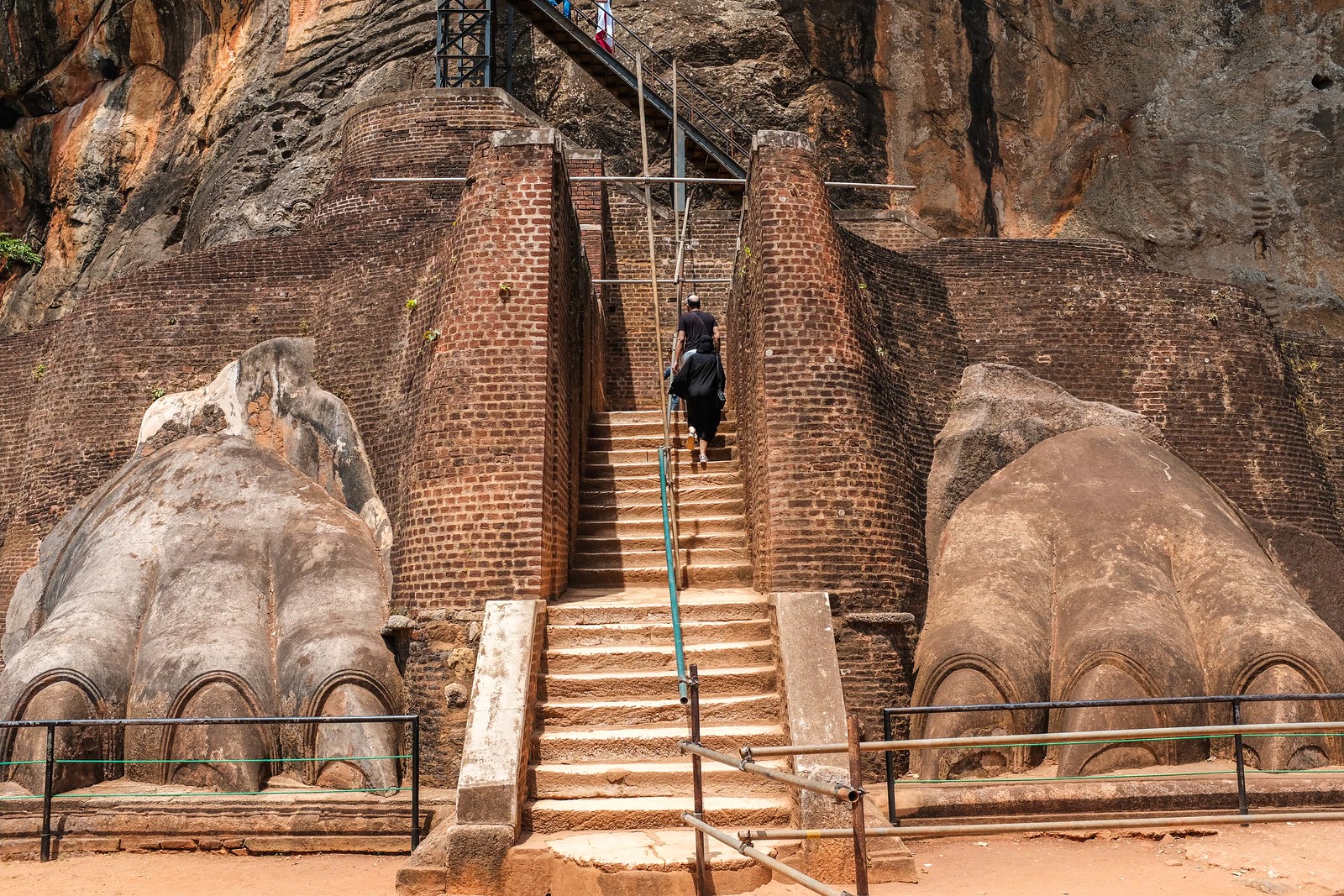 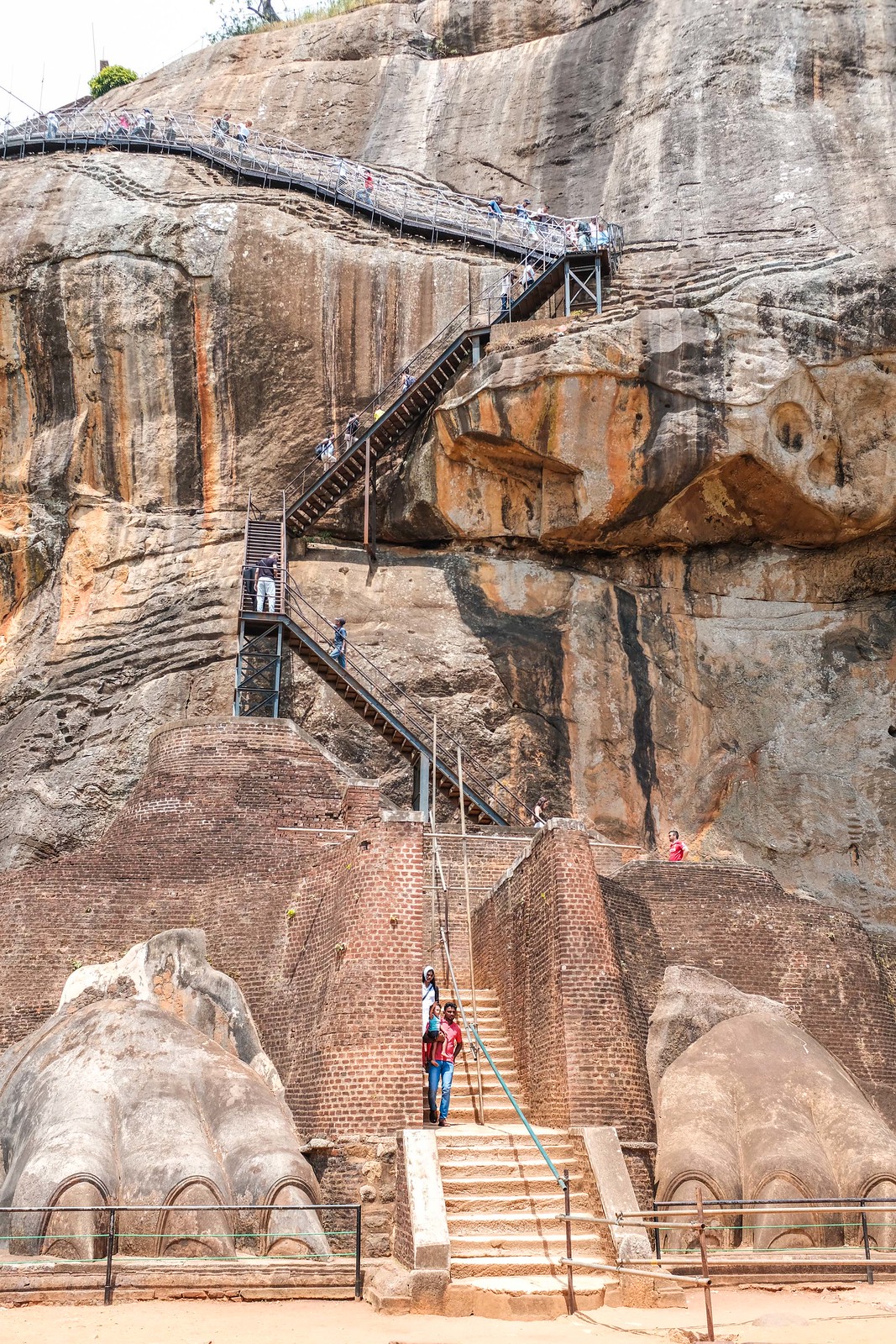 Entering from the stone steps connected to the attached near vertical metal staircase is the final ascent and yet the toughest to climb. I’ve seen countless of people, both young and old hesitant to tackle the narrow iron staircase, but with some urging from companions while taking it slowly, everyone will make it eventually. 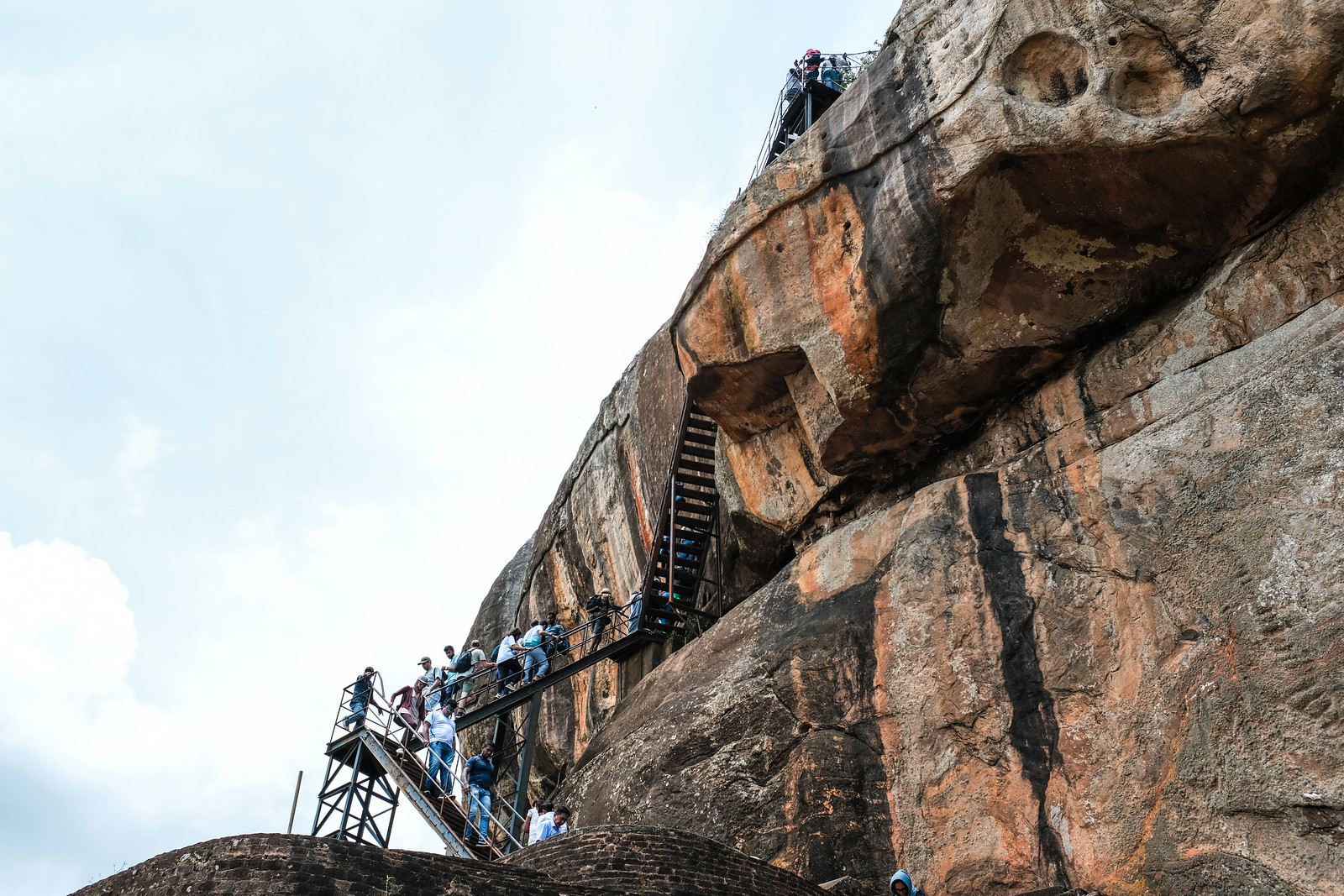 Formed from a lava plug from a long extinct volcano, all the effort of climbing Sigiriya, particularly on a hot midday afternoon is all worth it once you reach the topmost part of Sigiriya.

Welcoming you with a windy breeze, the magnificent panoramic view of the surrounding lush green lands and the weathered stone ruins of the ancient citadel, it is the perfect spot for a few minutes rest and make friends along the way, specifically with local visitors, who like you are all in awe of the experience of scaling an important historical site. 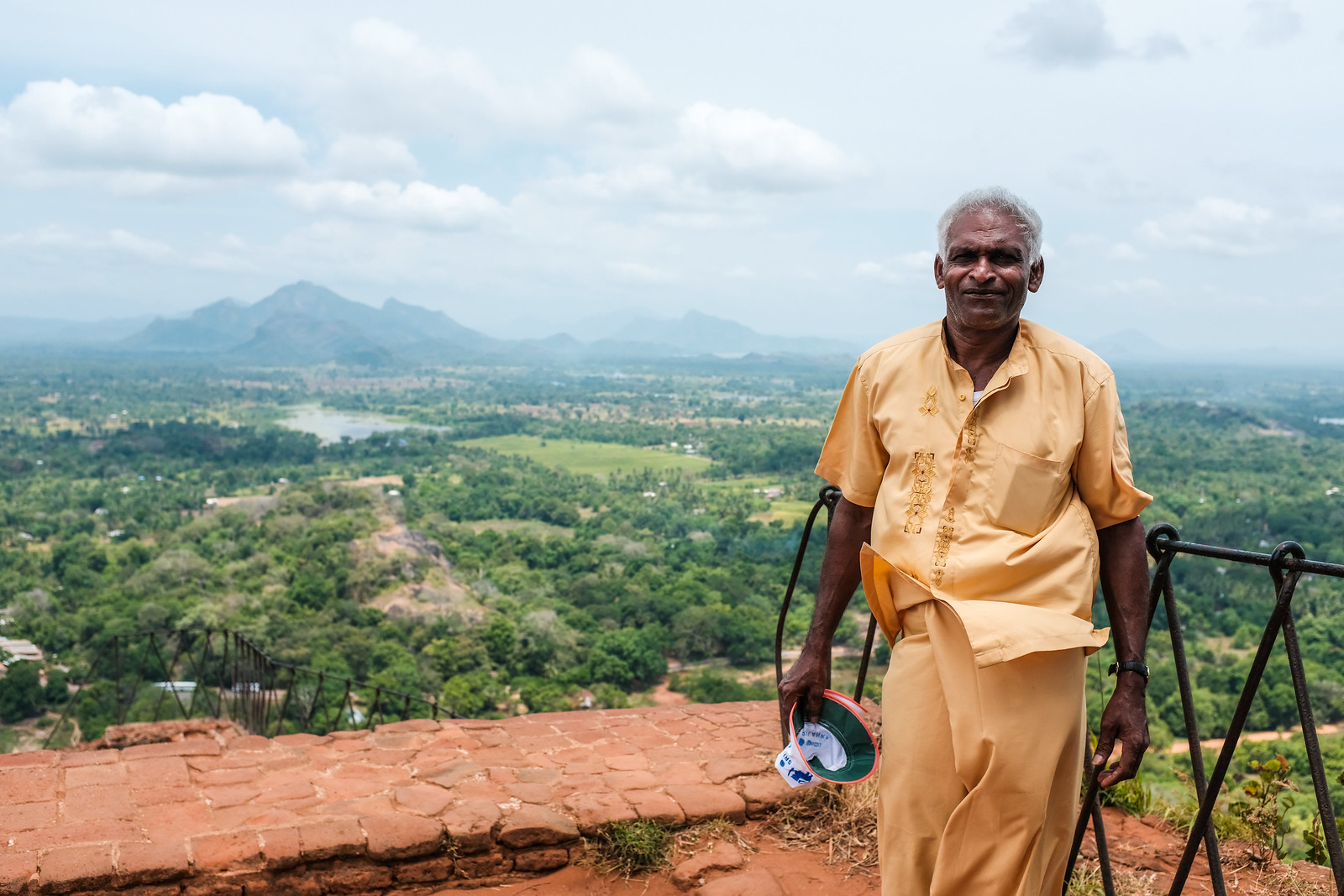 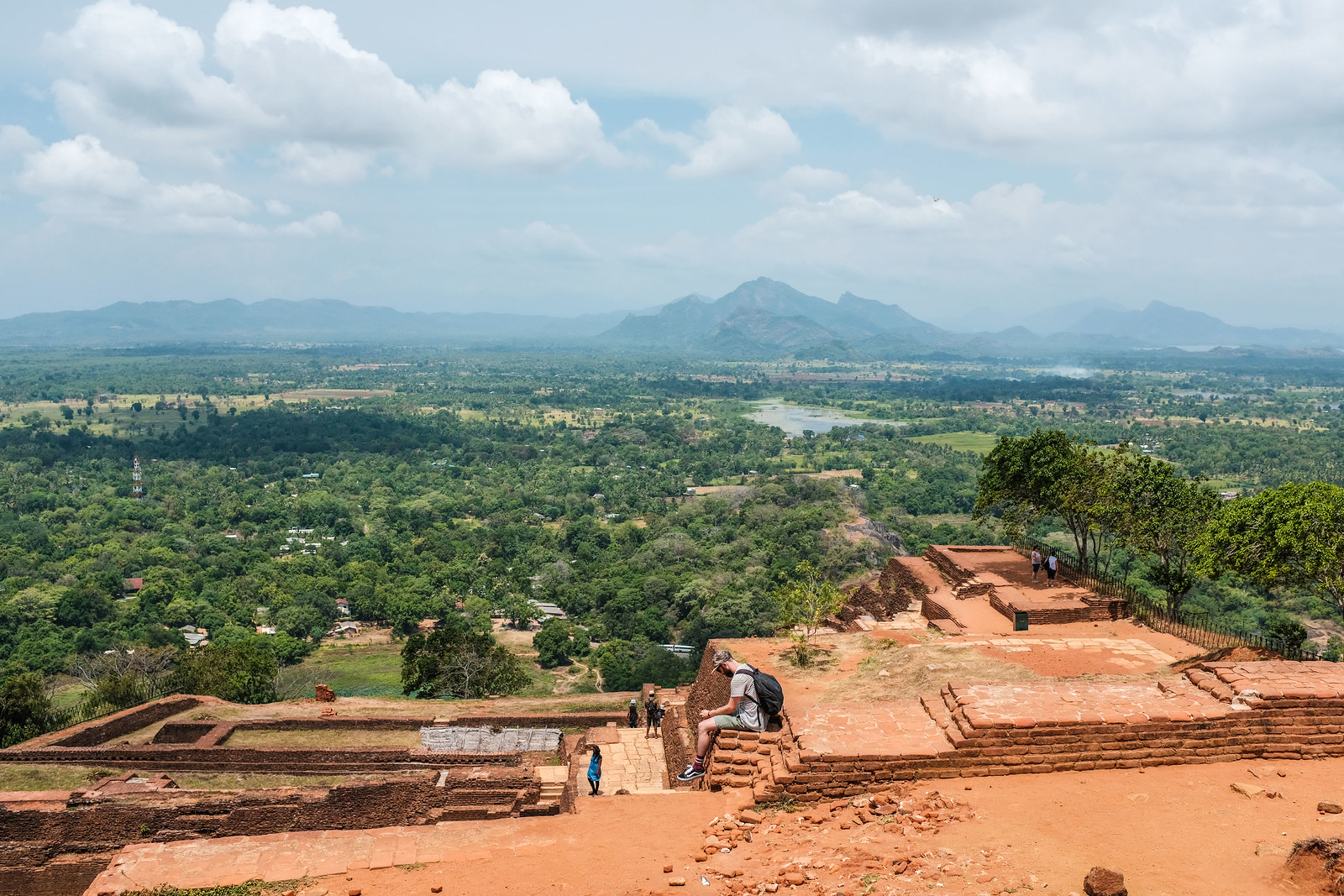 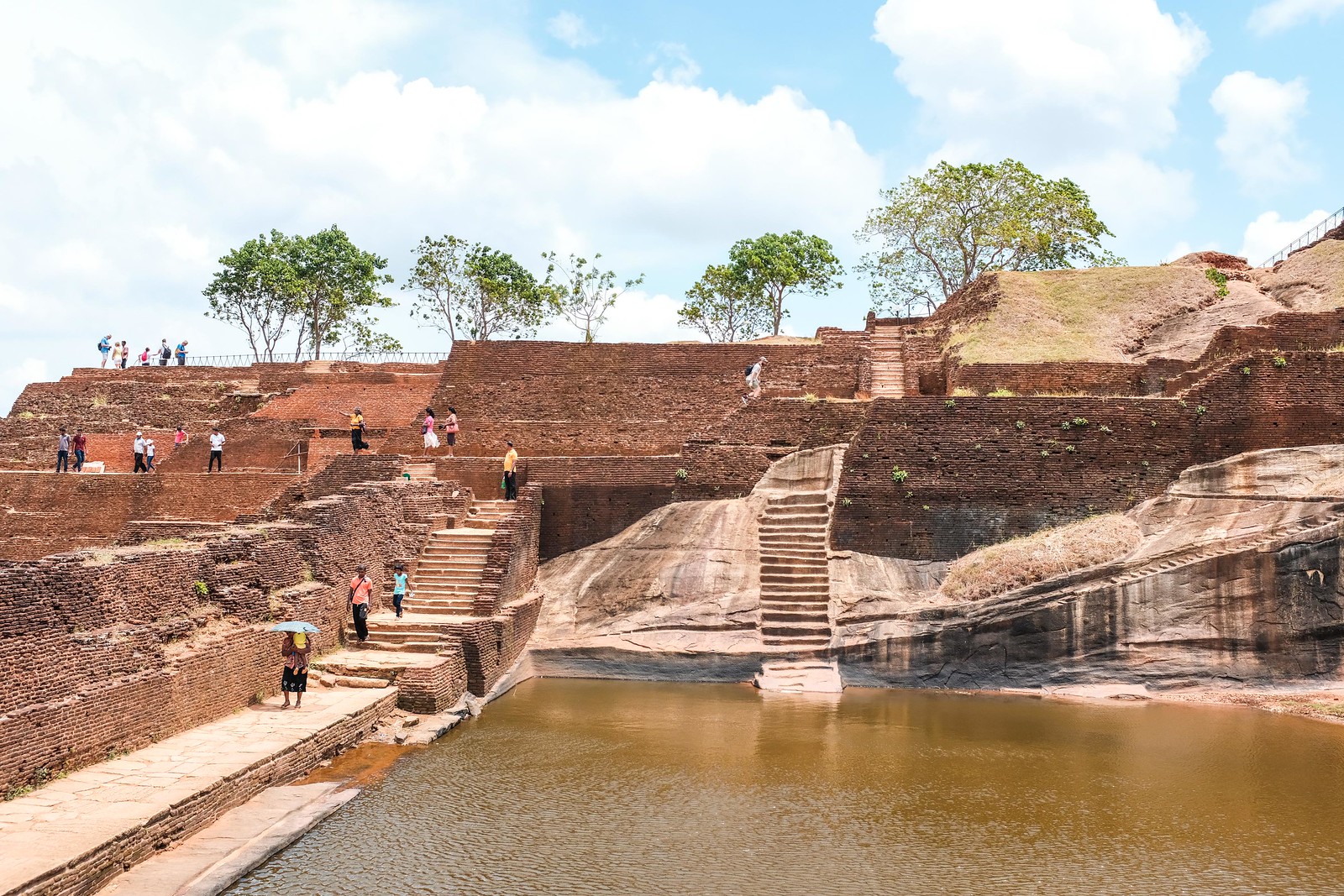 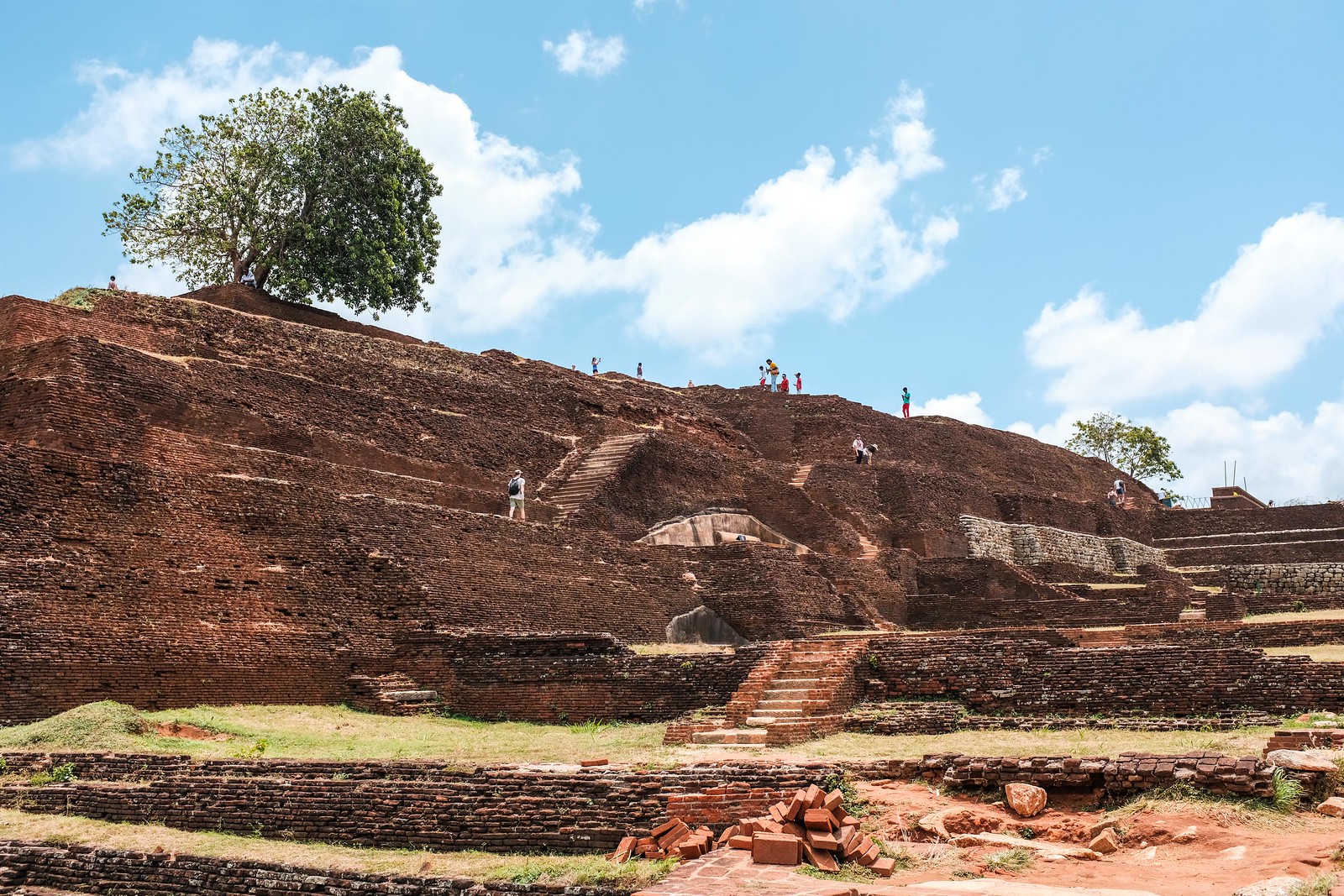 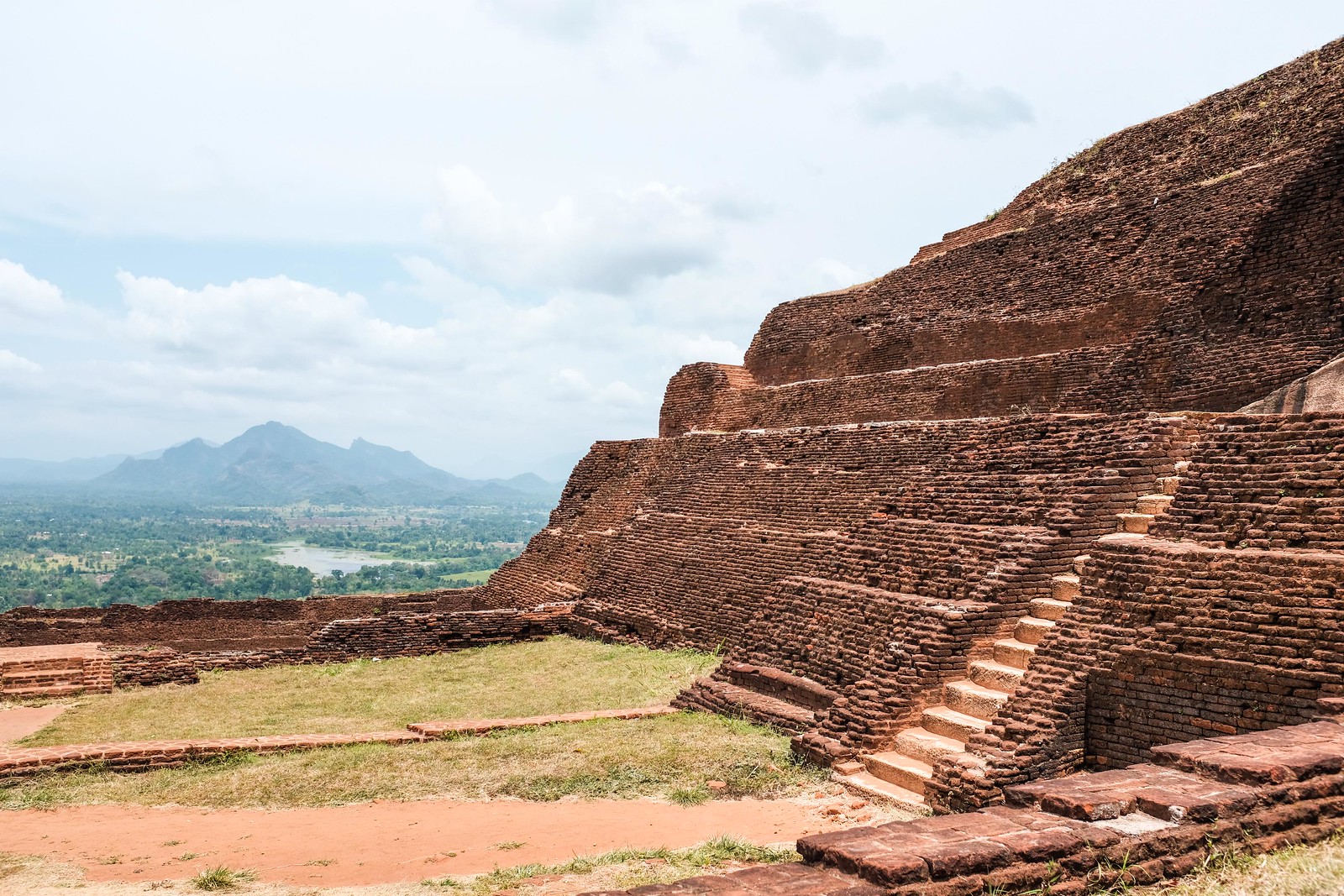 Located a few kilometers north from Sigiriya is the Pidurangala Rock, which is now becoming a popular alternative for those who don’t want to pay the hefty entrance fee to the heritage site of Sigiriya, instead getting a view of the rock from afar. 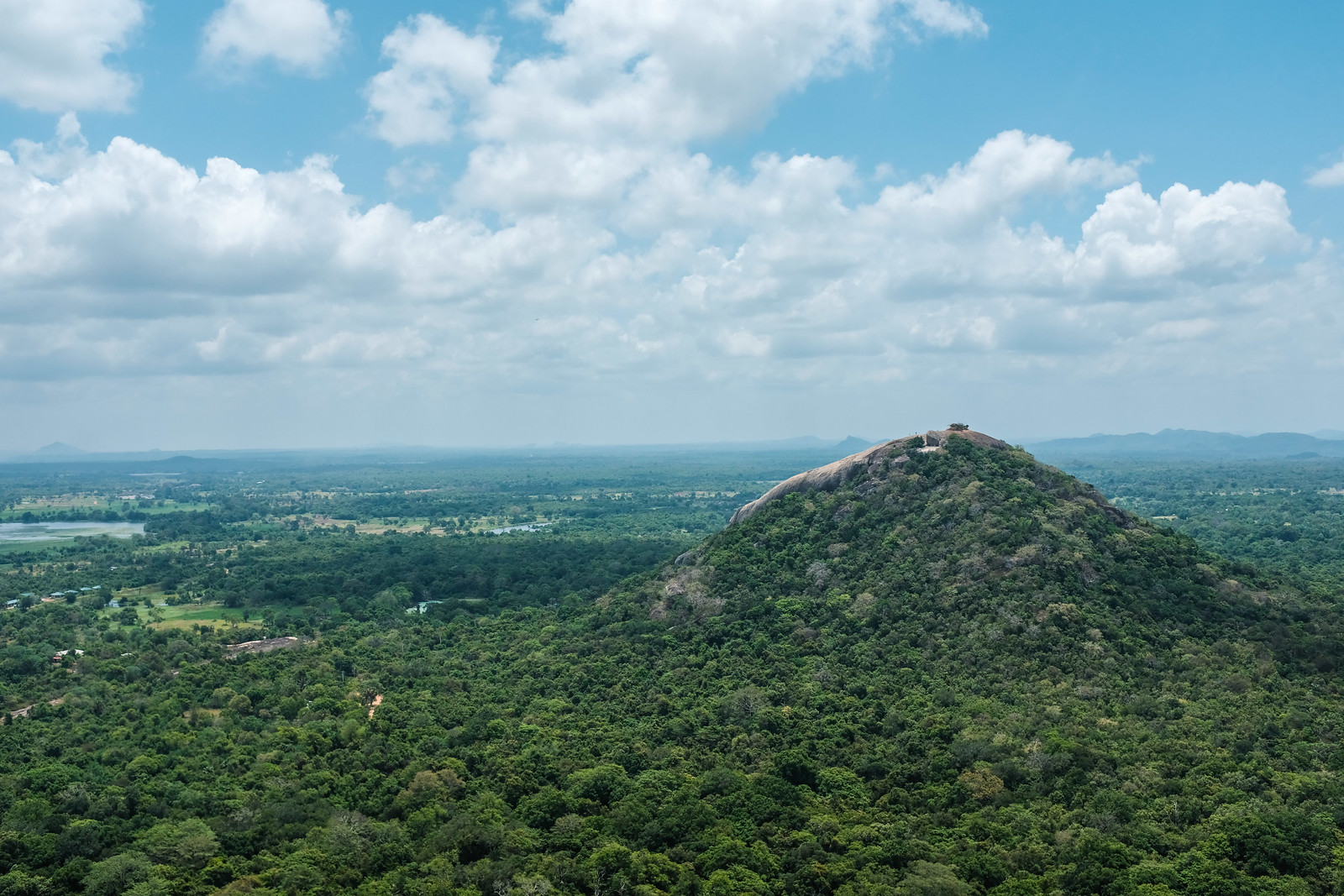 Pidurangala and Sigiriya are interlinked by history.

It is said that back in the 5th century, while King Kasyapa was building the ancient rock fortress of Sigiriya, monks living around the famous rock are relocated to Pidurangala. The entrance to the Pidurangala Rock is through the Pidurangala Vihara, an ancient Buddhist temple which still houses some objects from the relocated monks. An entrance fee of approximately 3USD is needed to enter the premise. 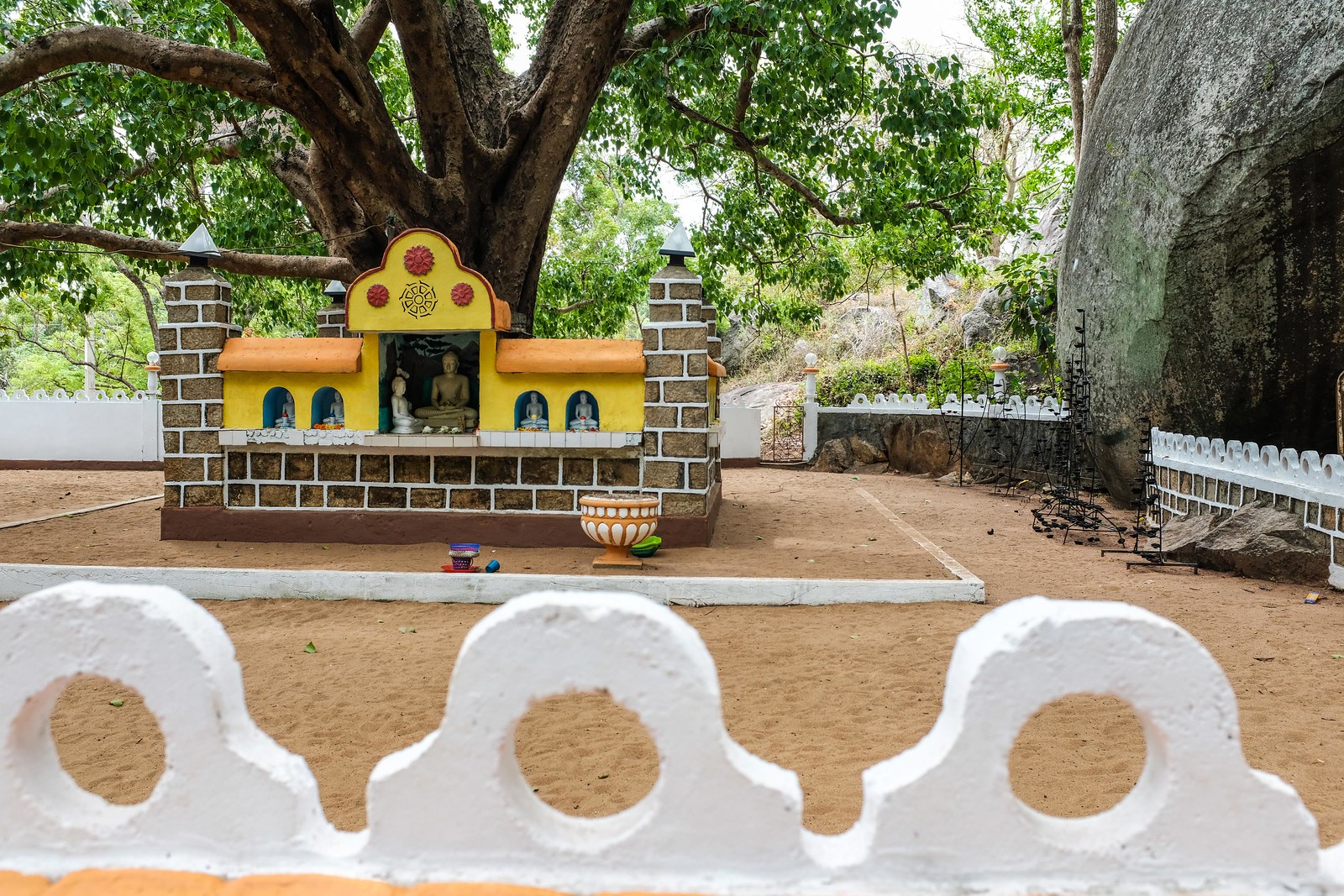 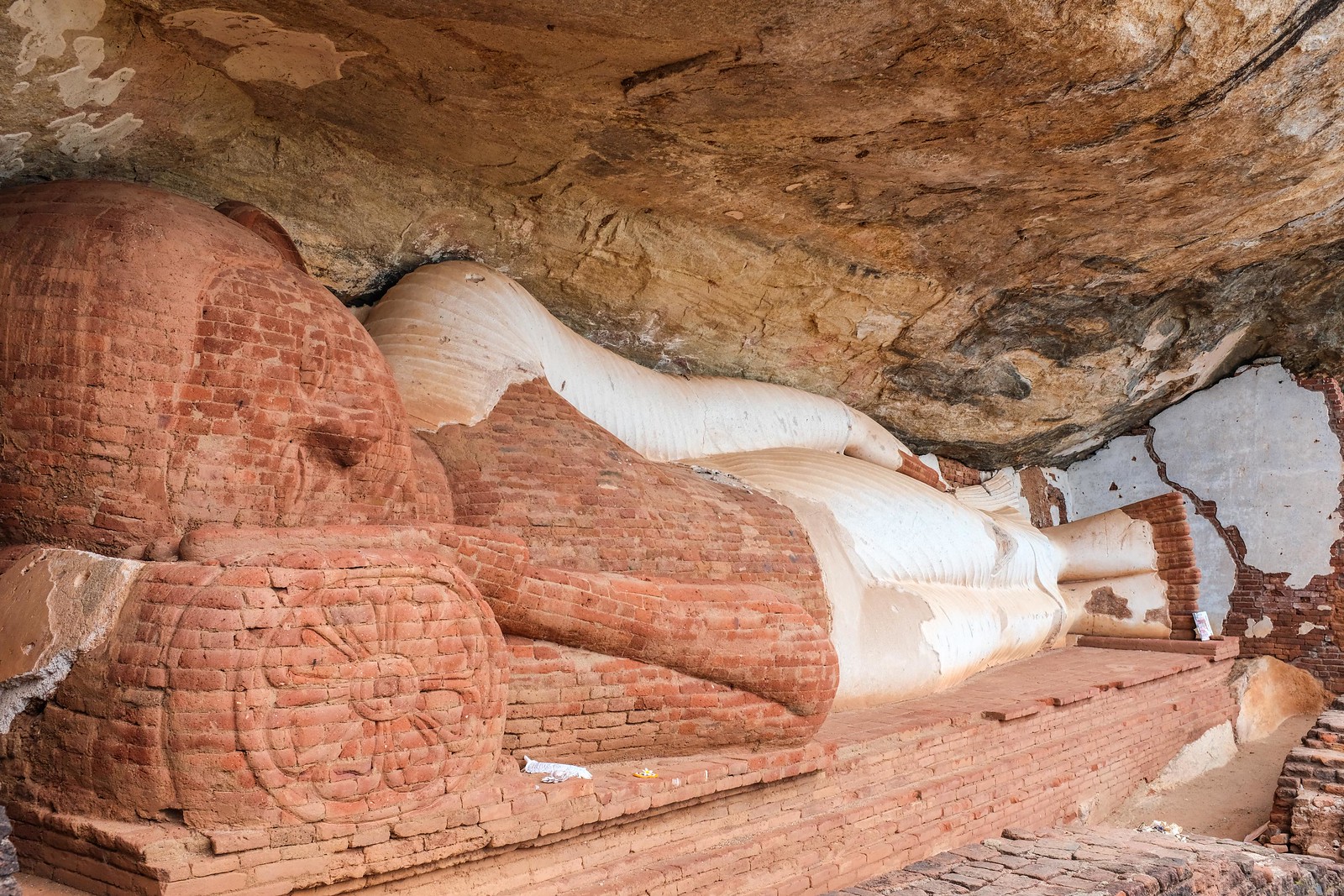 The pathway up to Pidurangala Rock is short and fun, it is more of a walk in woods kind of climbing as compare to the steep metal staircase of Sigiriya. The only difficult part is squeezing in between the large boulders near the top.Then once you made it to the top, the spectacular view of Sigiriya rock from afar, standing strong at the backdrop of lush greenery is exactly the reason why you are in Sri Lank after all.

I view the climb of Pidurangala Rock as complimentary to the greatness that Sigiriya is. There should be no debate as to whether paying the not so backpacker budget friendly 30USD entrance fee to Sigiriya is worth it, because it is and a must for any first time Sri Lanka visitors like me, then if you have the time to spare, climb both Sigiriya and Pidurangala. 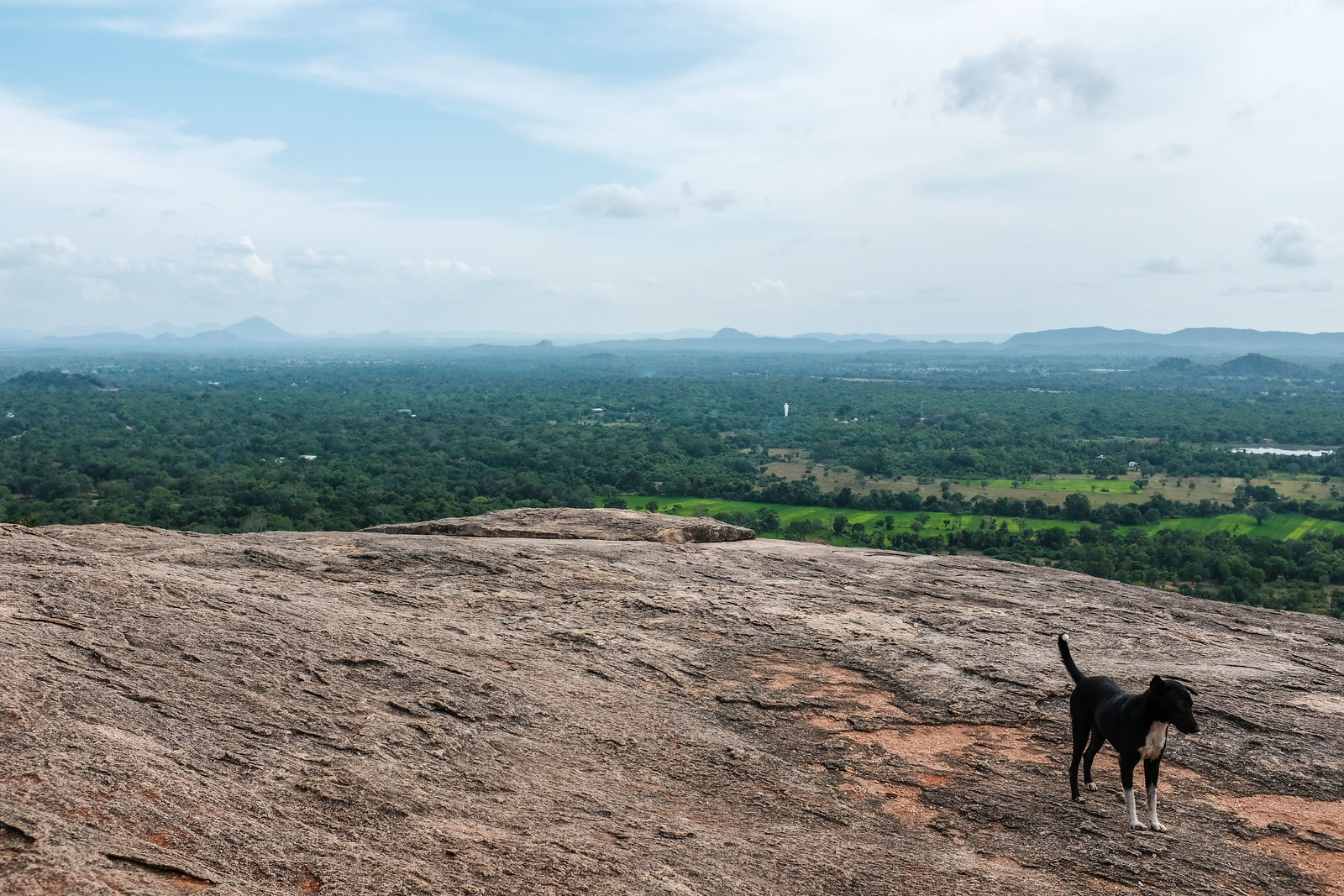 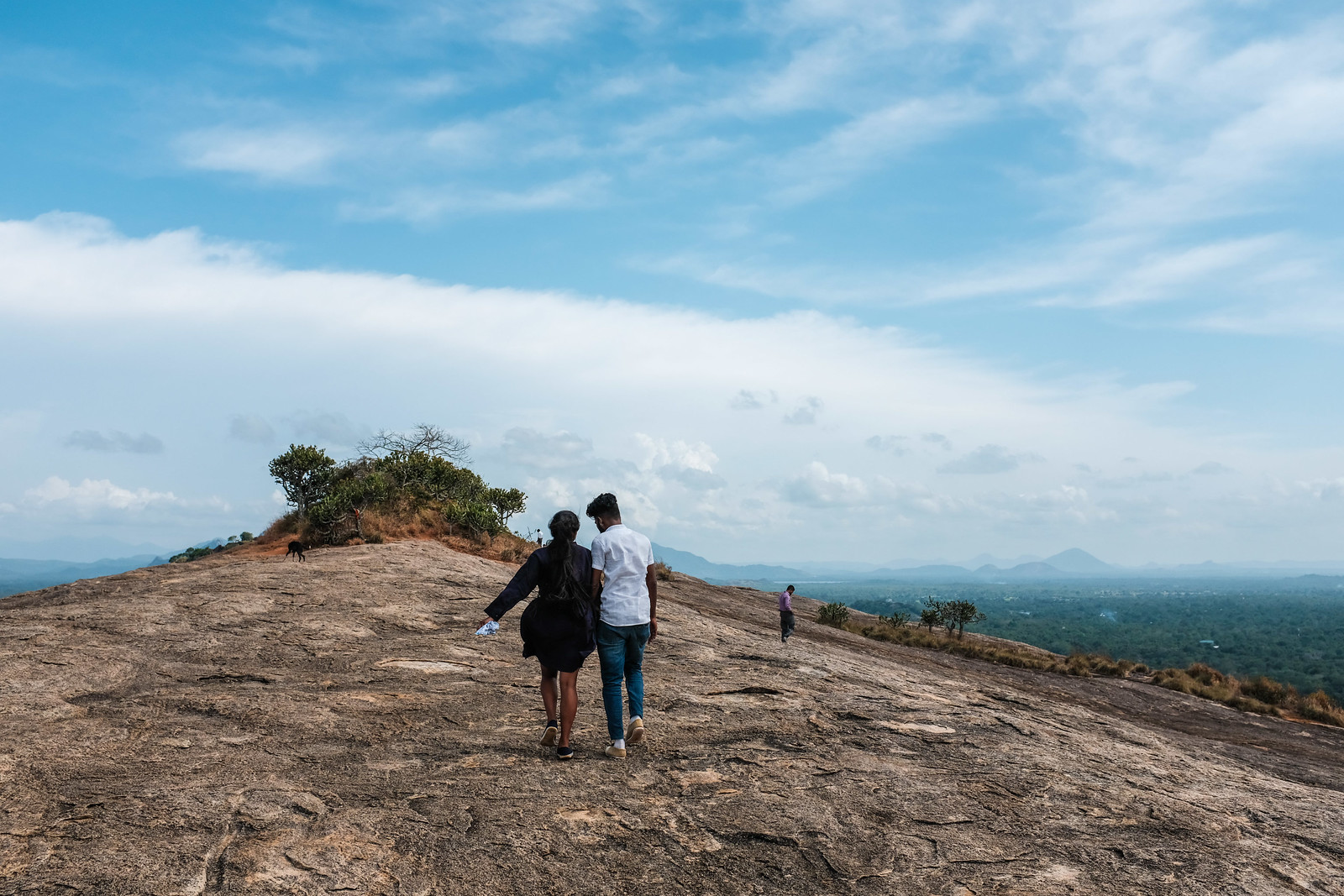 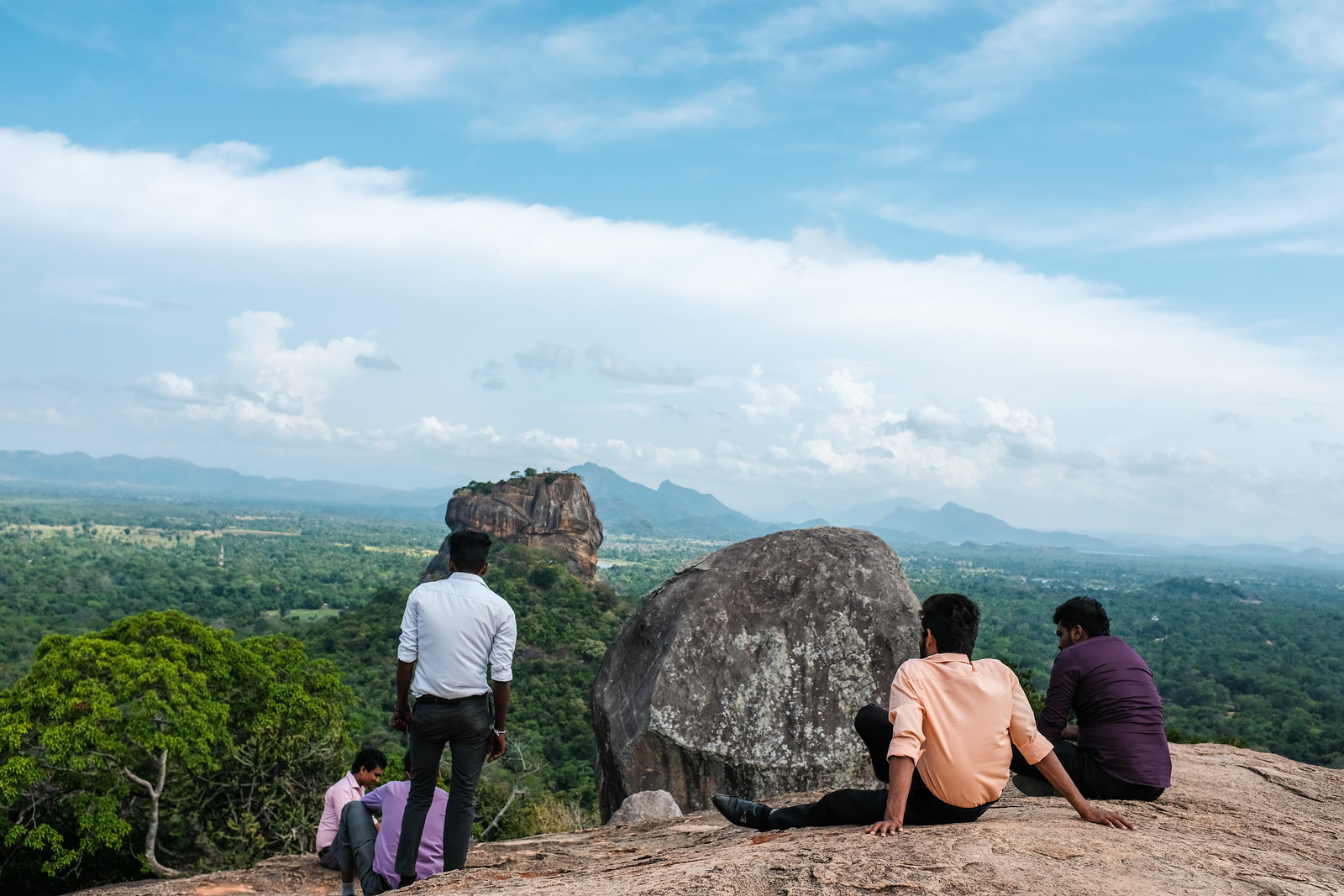 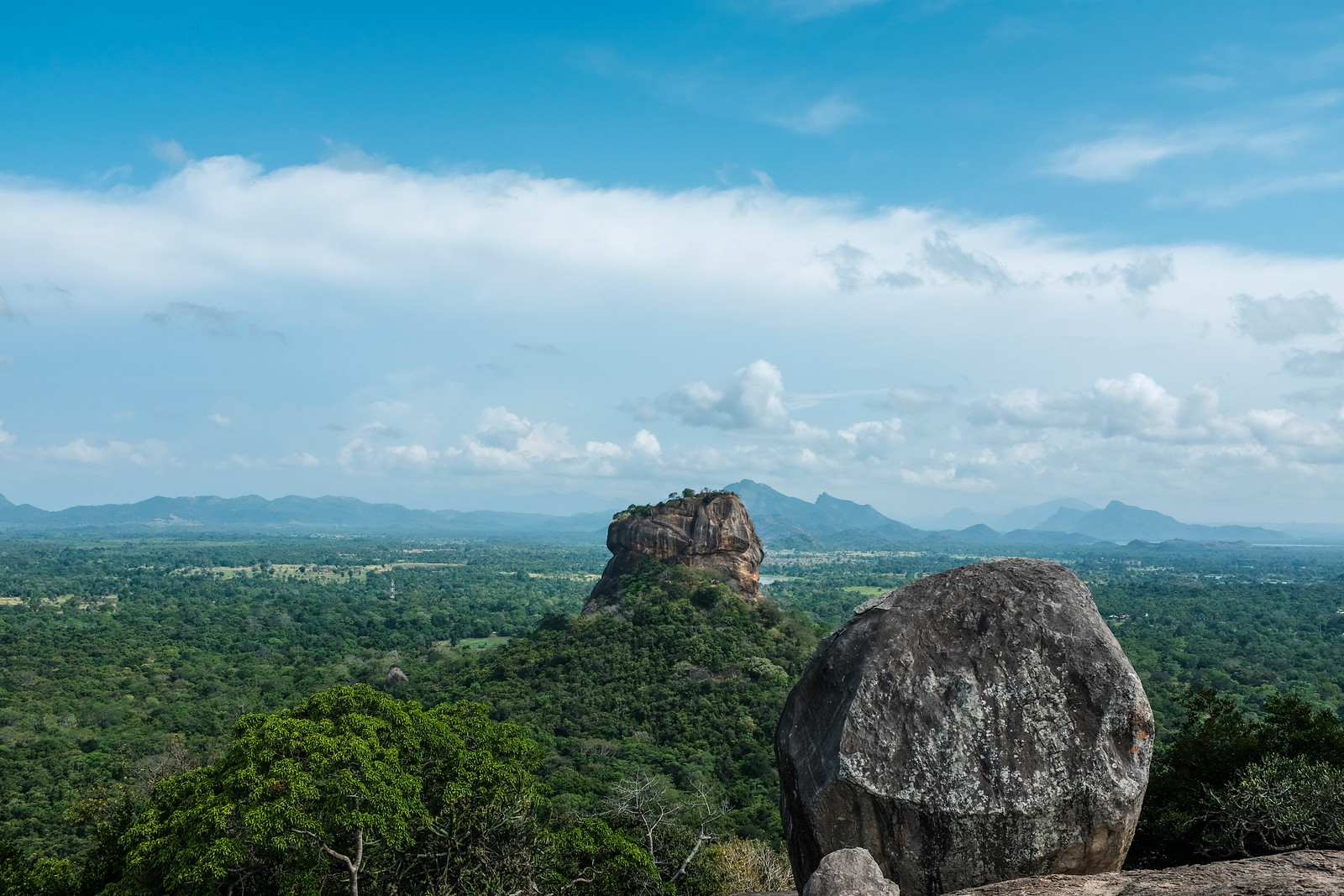 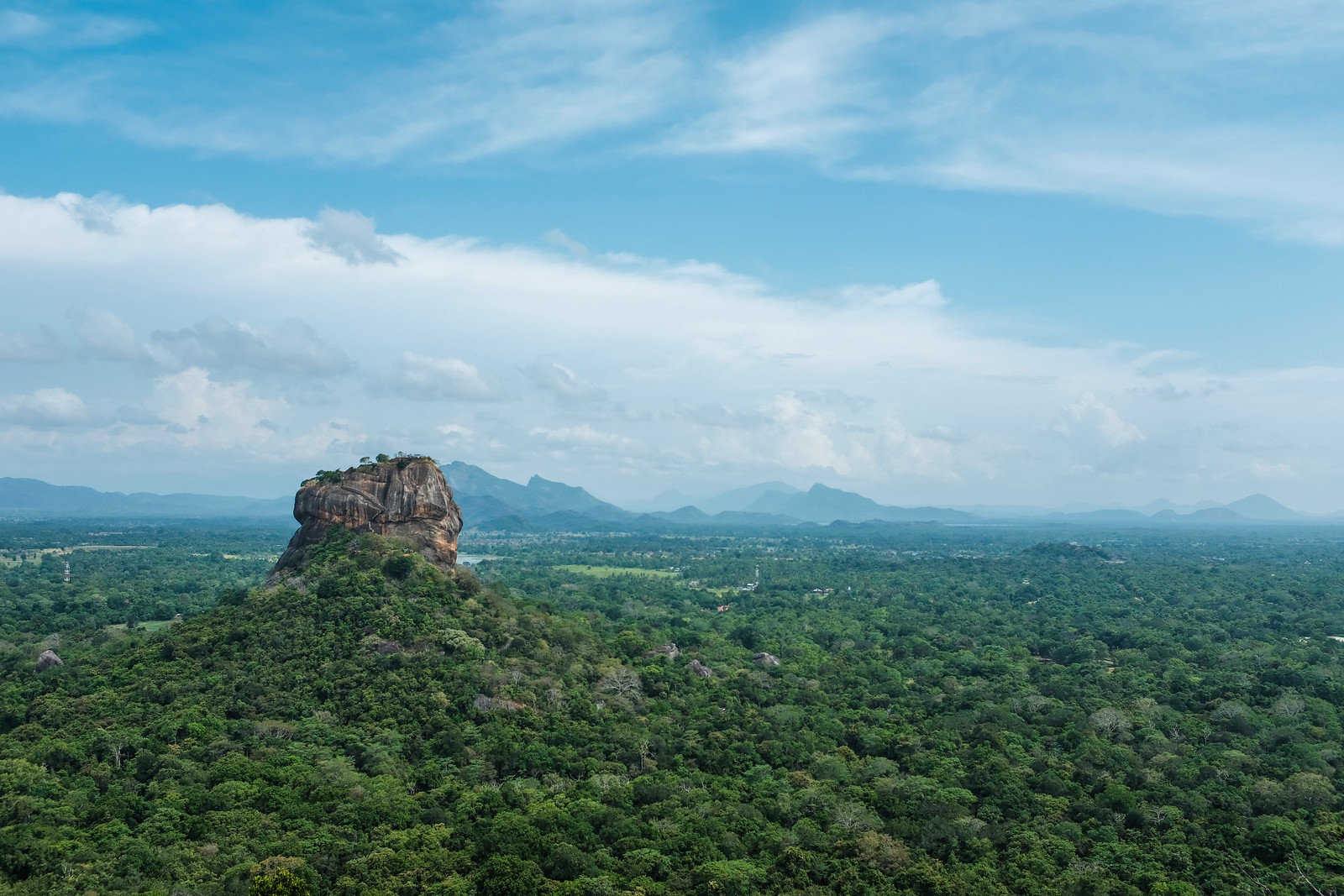