The one image of Bhutan that captures the outside world imagination of the so-called Last Shangri-La on Earth , it is none other than the Taktsang Lhakhang or the Tiger’s Nest Monastery.

The image of a monastery perched high above a vertical cliff is not only a sight to behold, it ignites imagination about a kingdom where old ways are practiced and encourages a journey of discovery to a distant land of majestic peaks, monumental fortress and pristine nature. 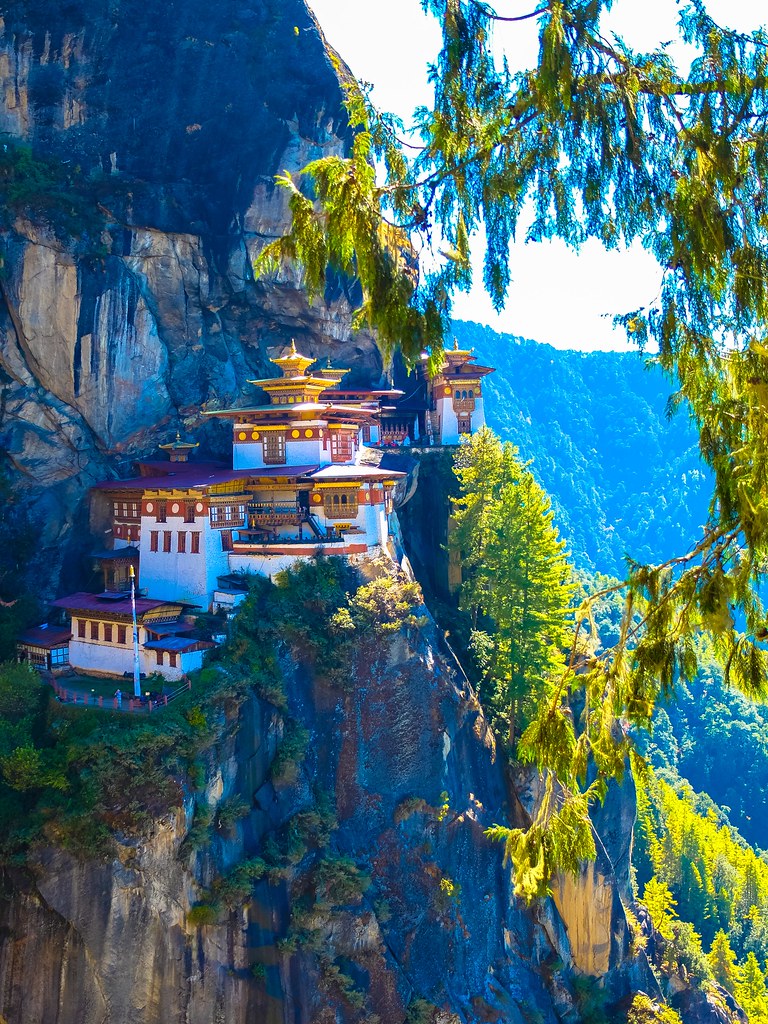 Like countless others, I am intrigued by the Tiger’s Nest, the very image is what drew me to Bhutan.

Taktsang Lhakhang or popularly known as the Tiger’s Nest is a Buddhist temple complex on an isolated location, clinging to a 3,120 meters cliff on the side of the upper Paro Valley and only accessible via hiking on a mountainous path.

Built in 1692, said to be the holiest site in Bhutan, it is believed that around the Taktsang cave is where the Guru Rinpoche (Guru Padmasambhava) said to have meditated for three years, three months, three weeks, three days , and three hours. Tiger’s Nest is best-known as one of the thirteen “tiger lair” caves where the Guru meditated, thus explains the monastery name. 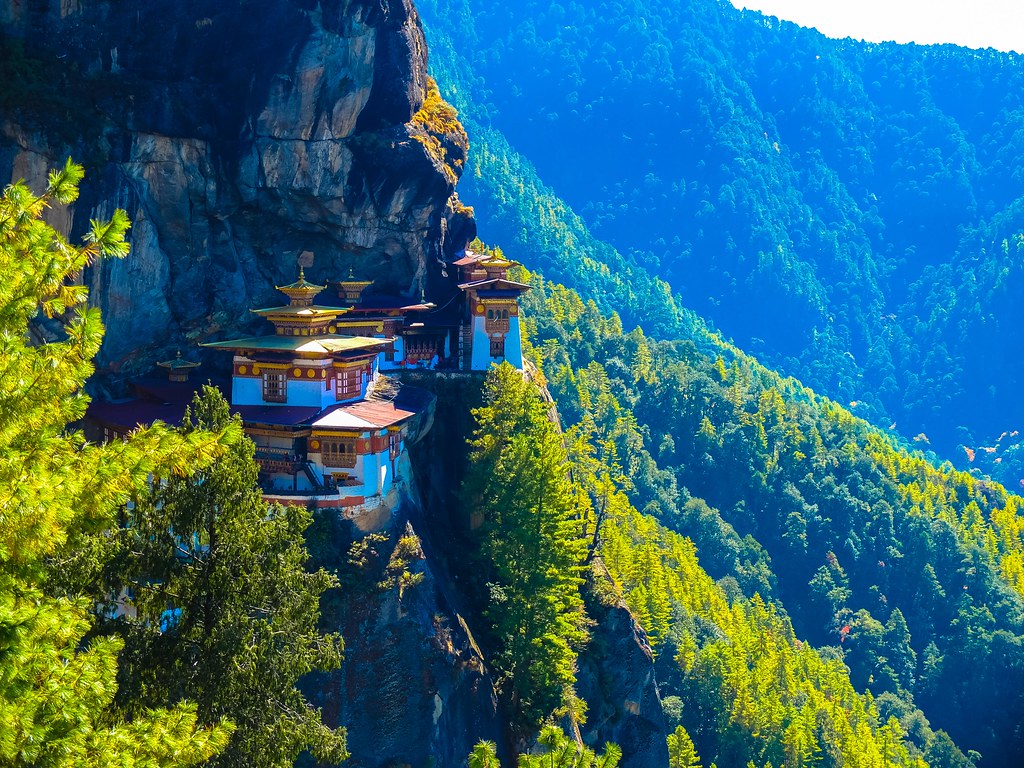 Climbing the Tiger’s Nest is the activity reserved for my final day in Bhutan. I suppose most offered tours are scheduled to do just the same in order for visitors to acclimate to the change in elevation and perhaps for the best parting impression of the incredible journey across the country.

According to my guide Namgay, he can climb to the top in an hour or less, while some visitors he guided before make it in 5 hours while most people takes about 3 hours on average to reach the temple complex. To make climbing more fun, I made a bet with him that I will make it to the top in 2 hours or less. 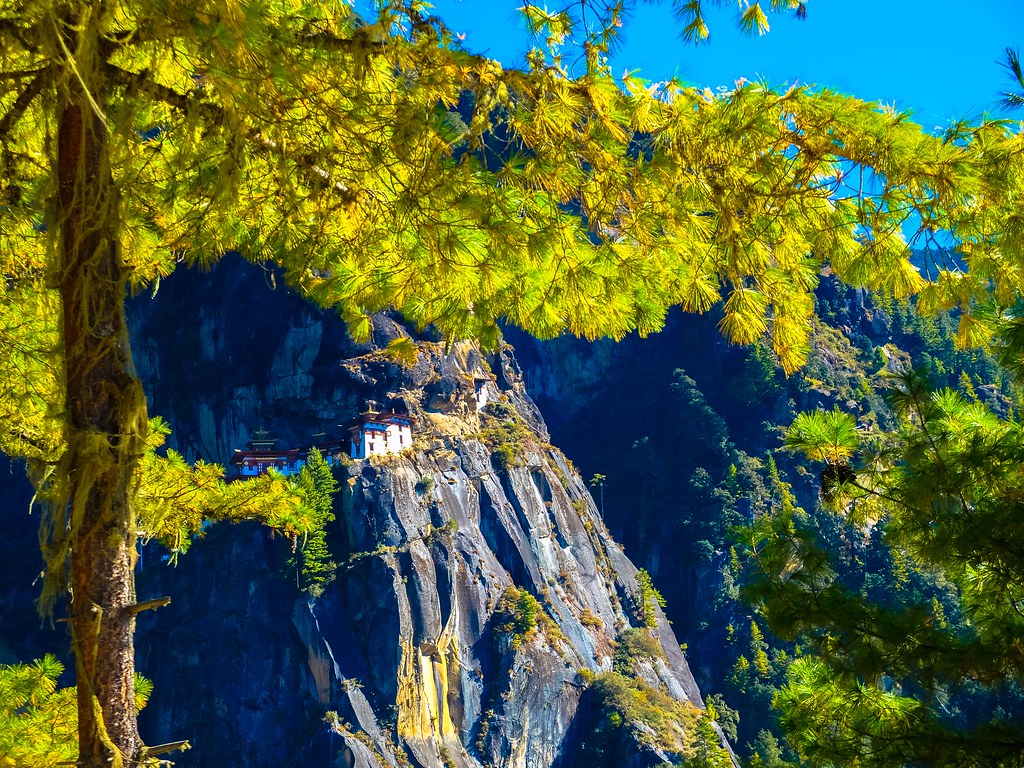 Climbing Tiger’s Nest is not easy as it seems to be, particularly if you are trying to win a bet. But if taken slowly and with plenty of rest and stops in between, it is fairly easy as the path towards the temple is well constructed and maintained.

The trail starts in the parking lot passing by a small row of shops, where you can catch the first glimpse of the Tiger’s Nest and how the view of the carvings of the cliffs from afar said to emanate the face of Padmasambhava.

From there, it is an uphill walk together with the rest of the daily visitors and pilgrimage. The journey to the top though at times really exhausting is a wonderful hike, passing by prayer flags and prayer wheels, with a view of the surrounding mountains and valley. Then, there is always the rewarding feeling that each step you take is a step closer to the Taktsang. 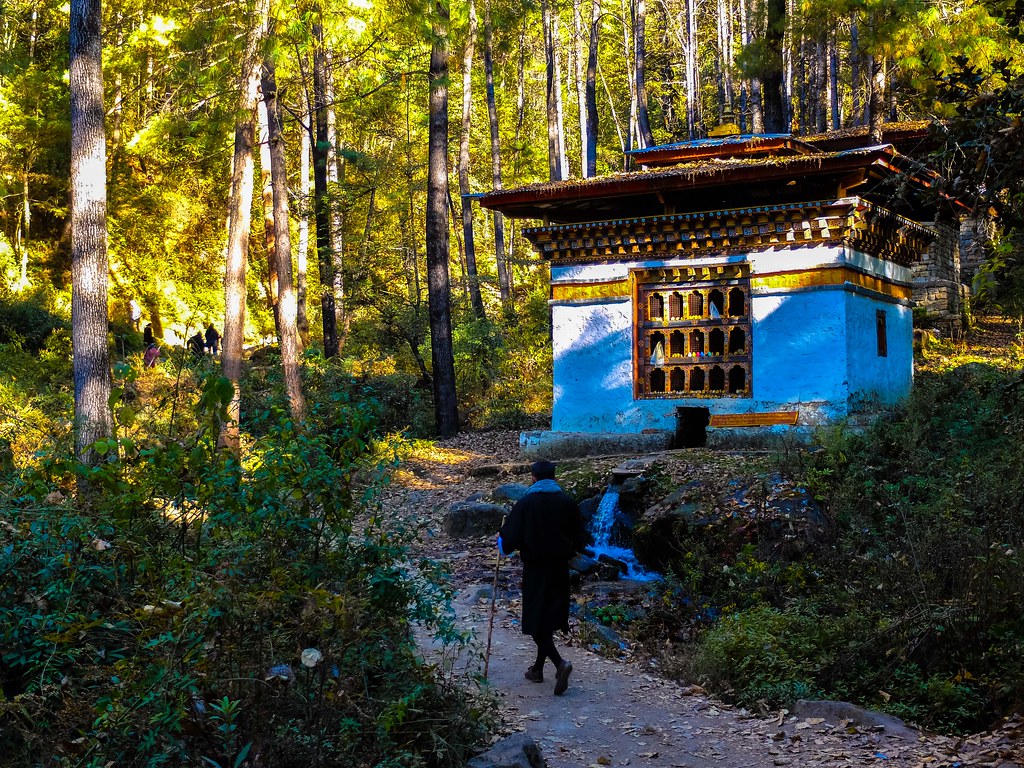 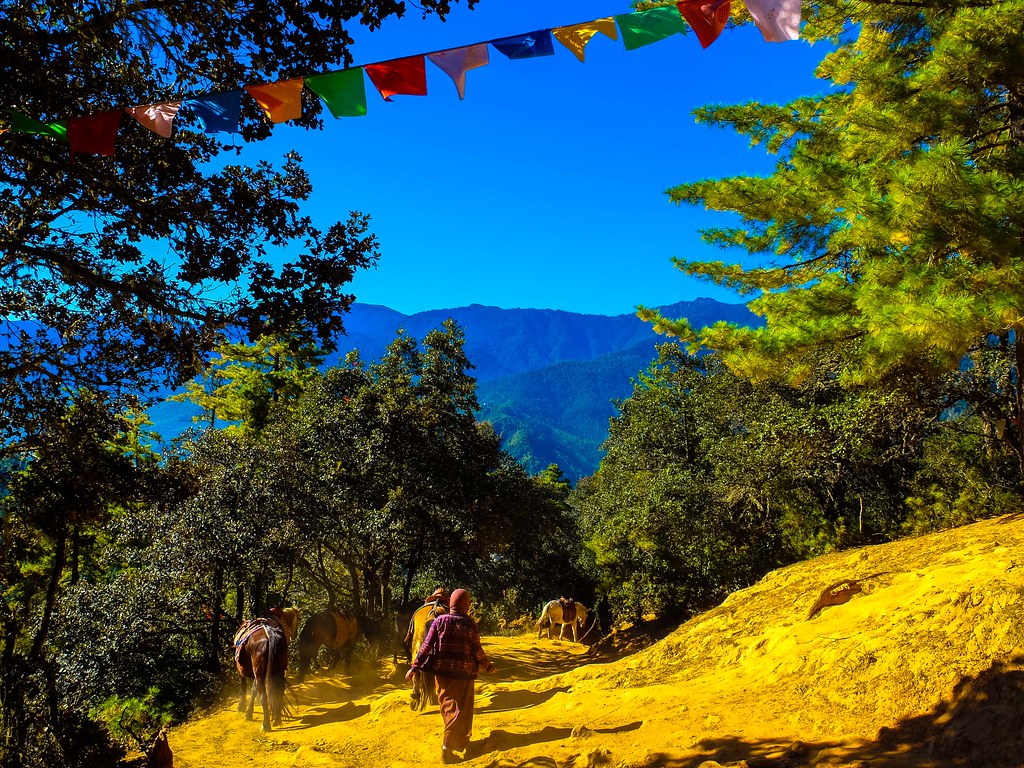 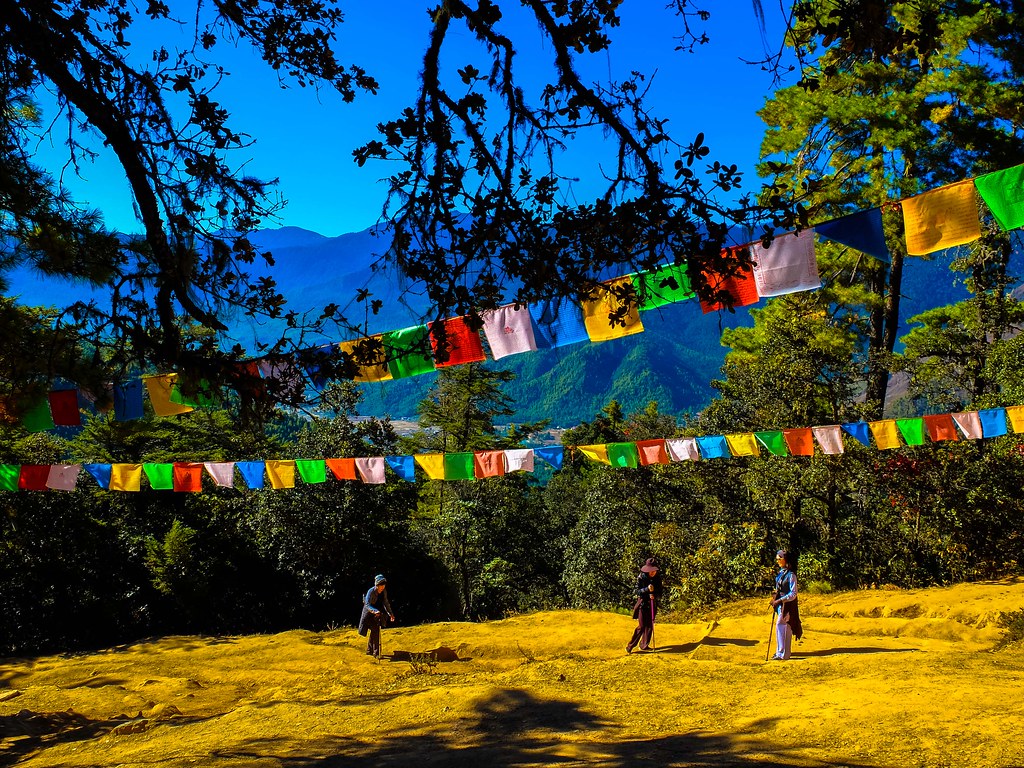 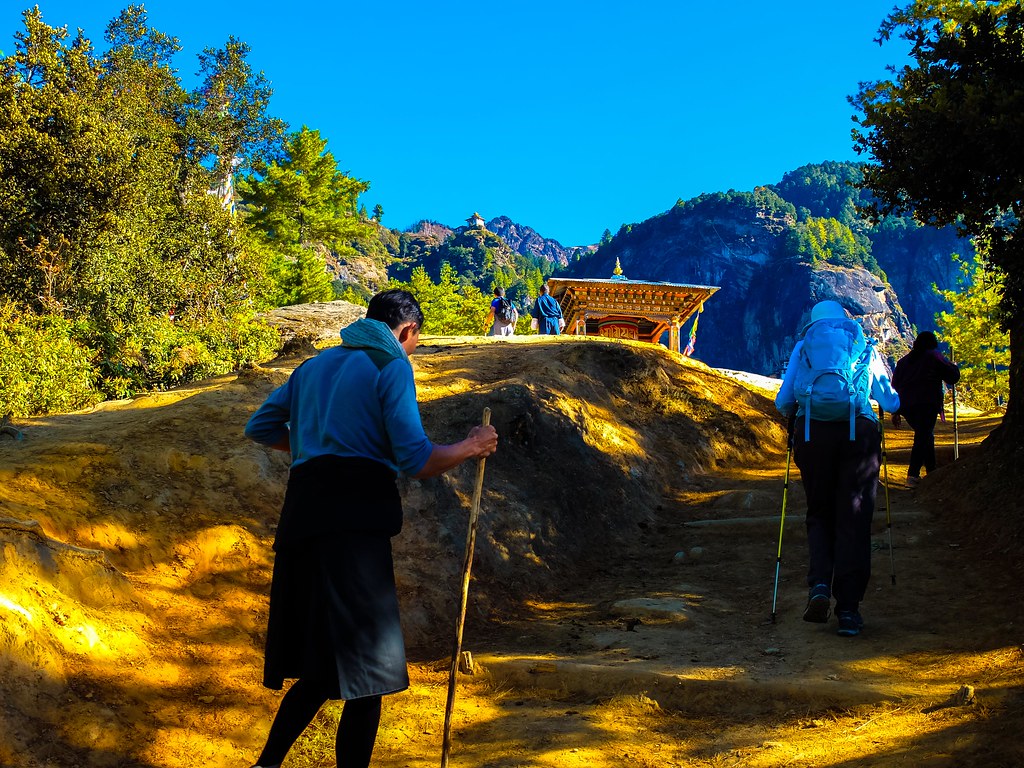 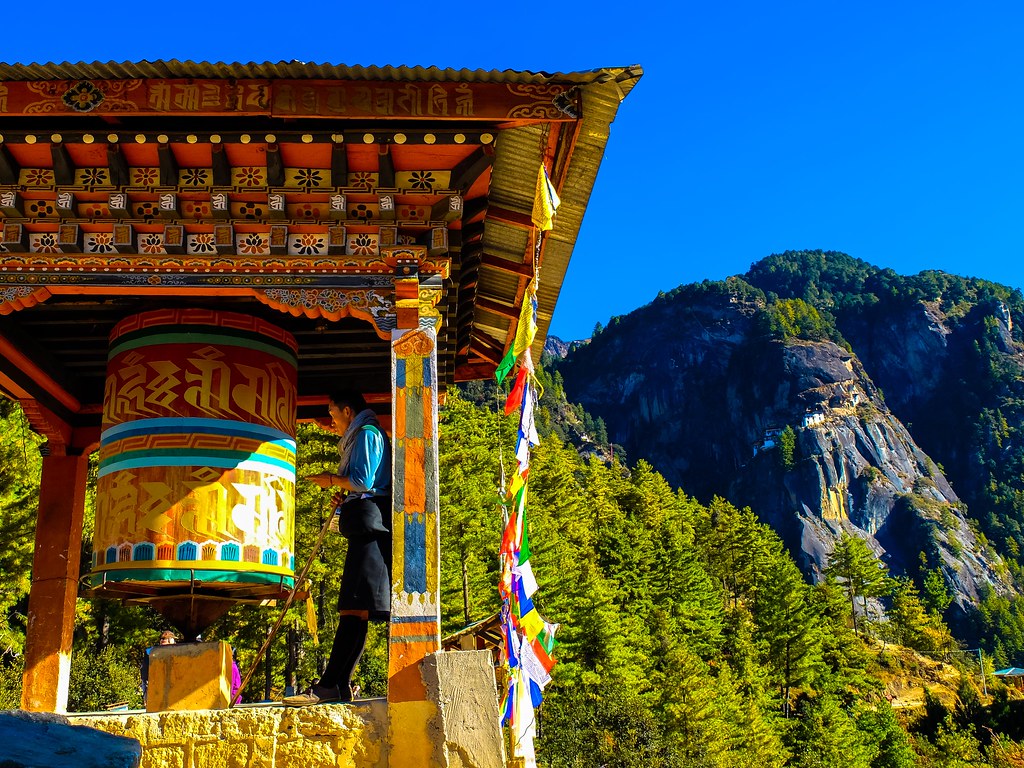 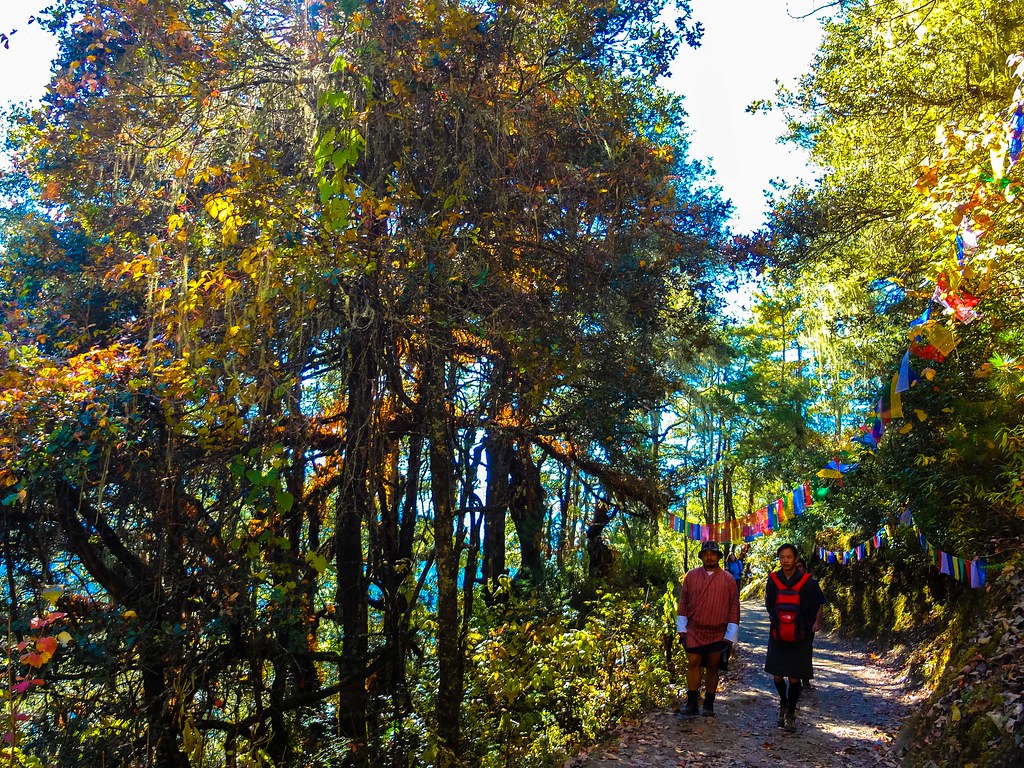 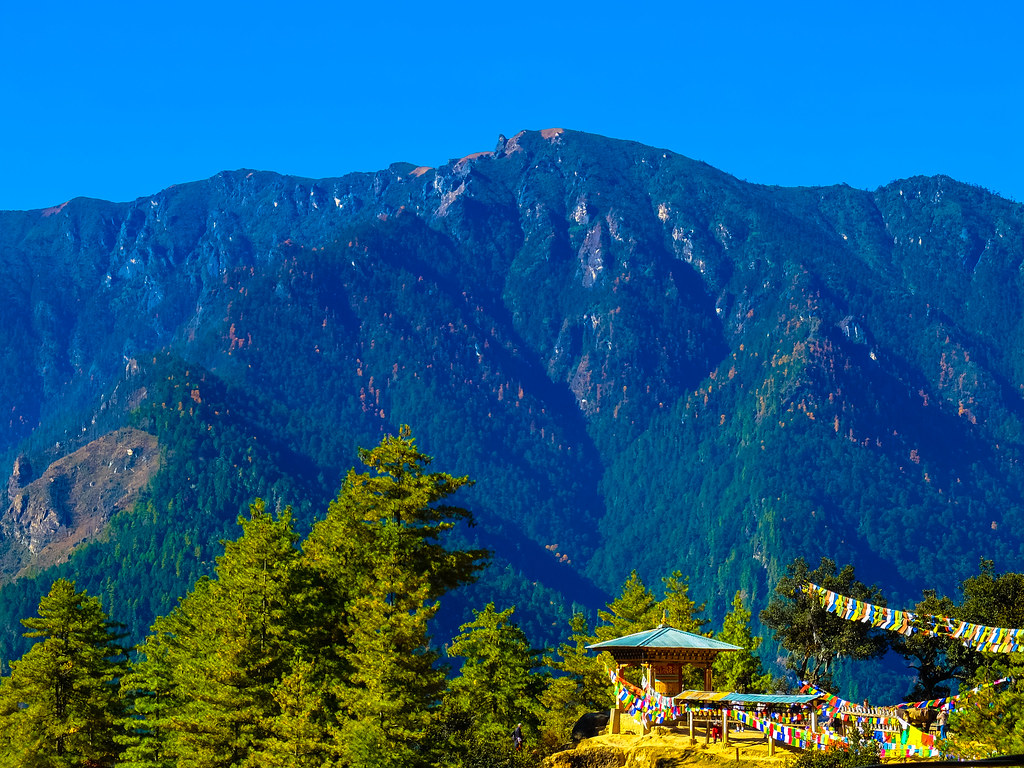 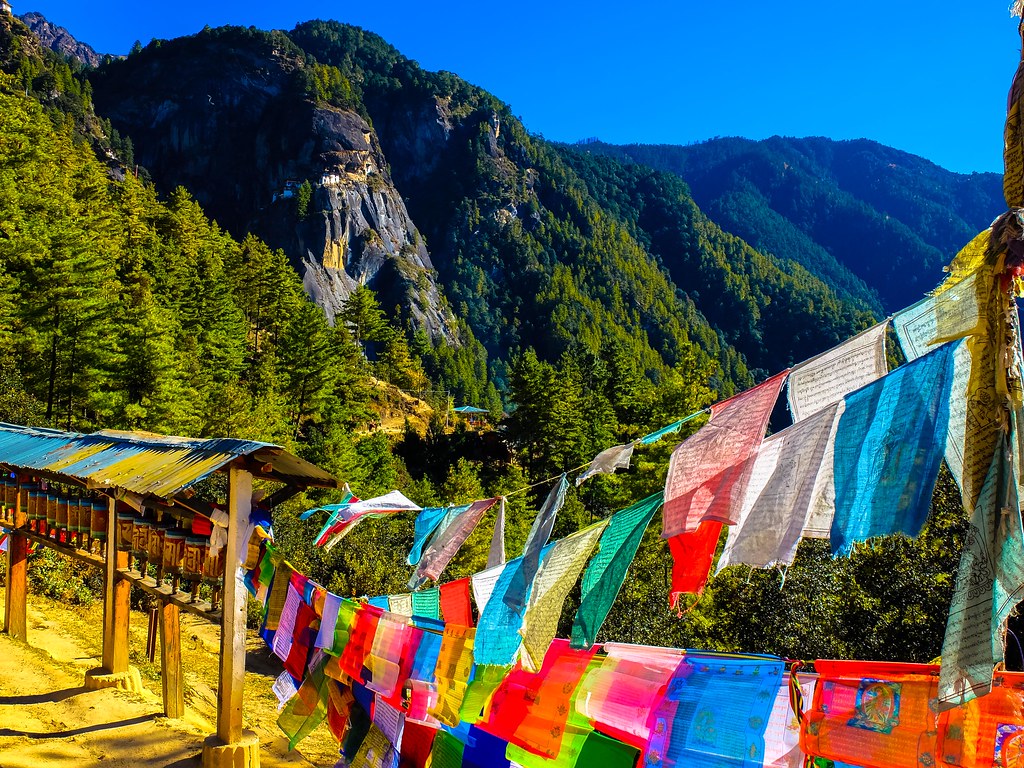 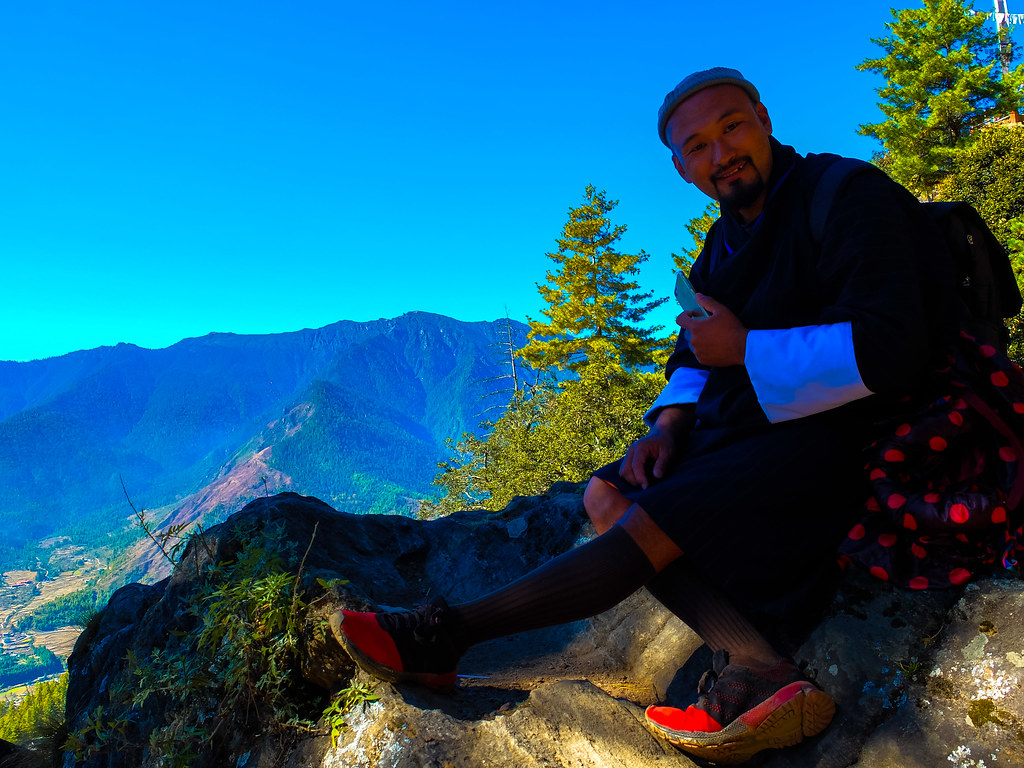 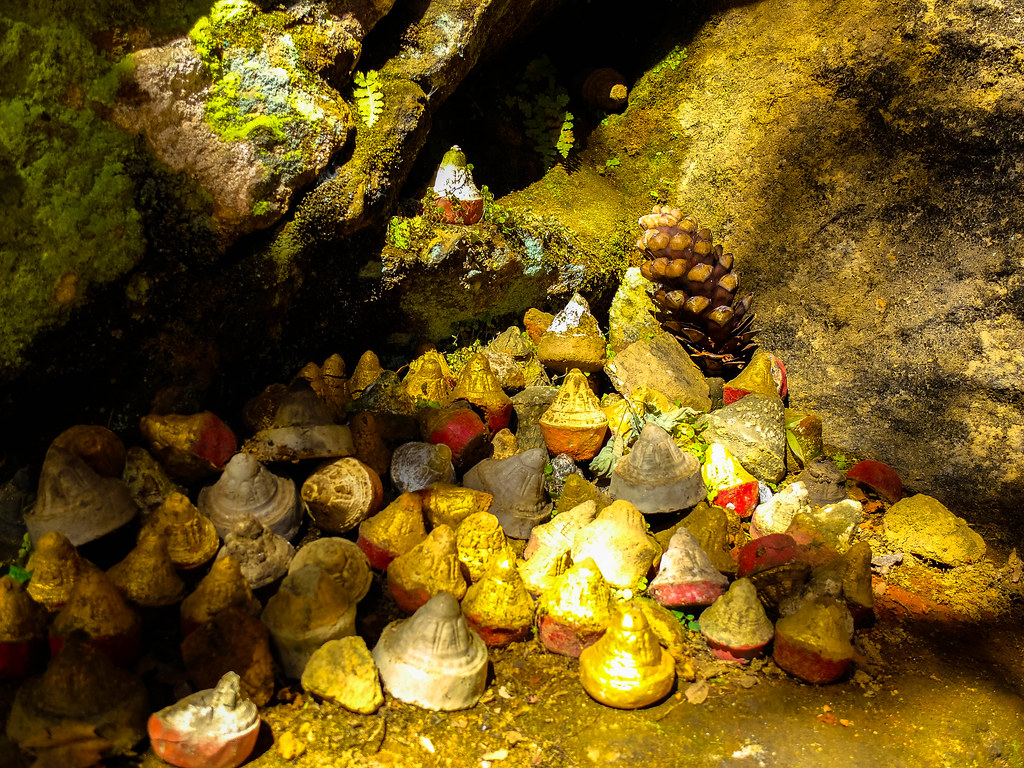 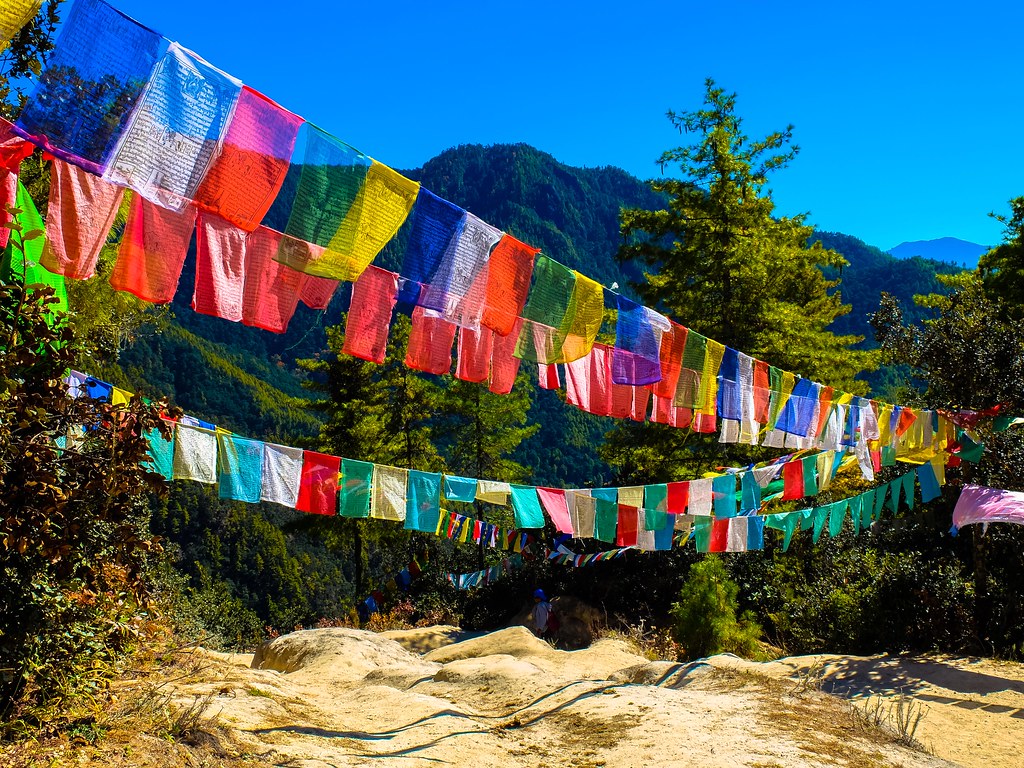 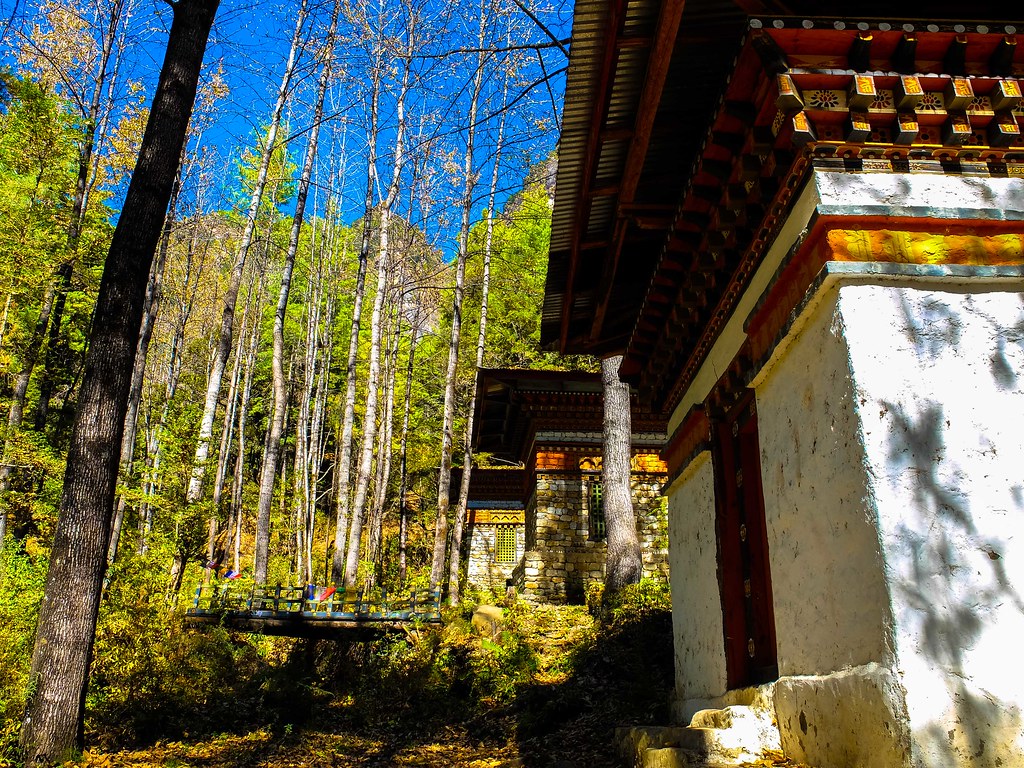 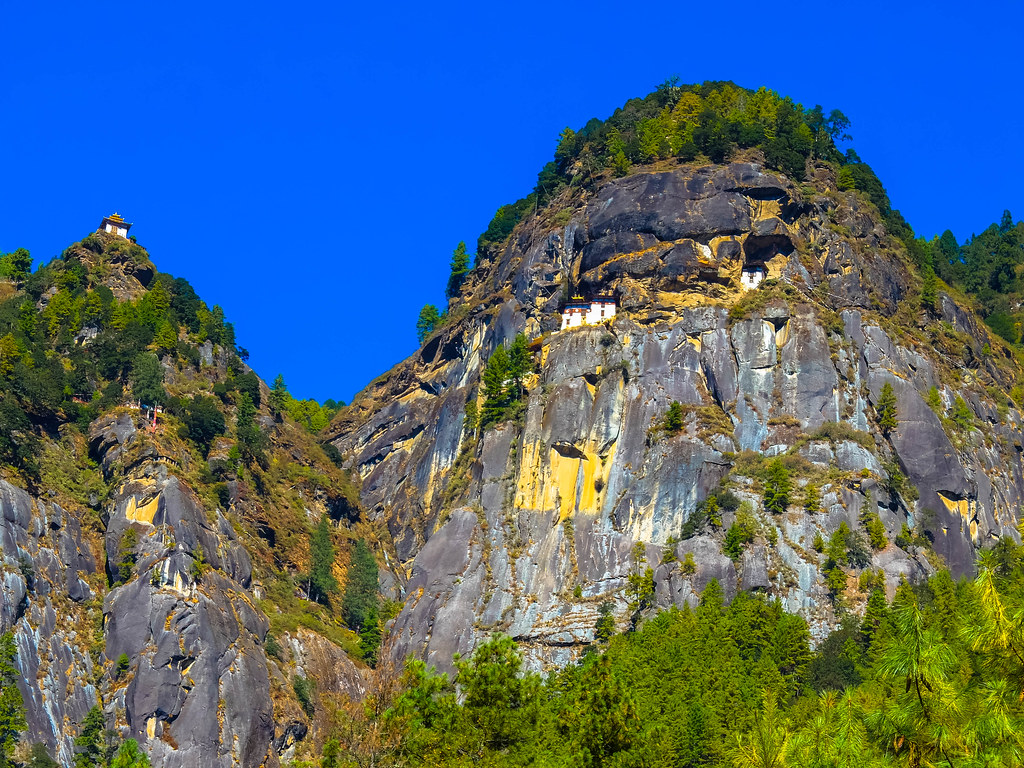 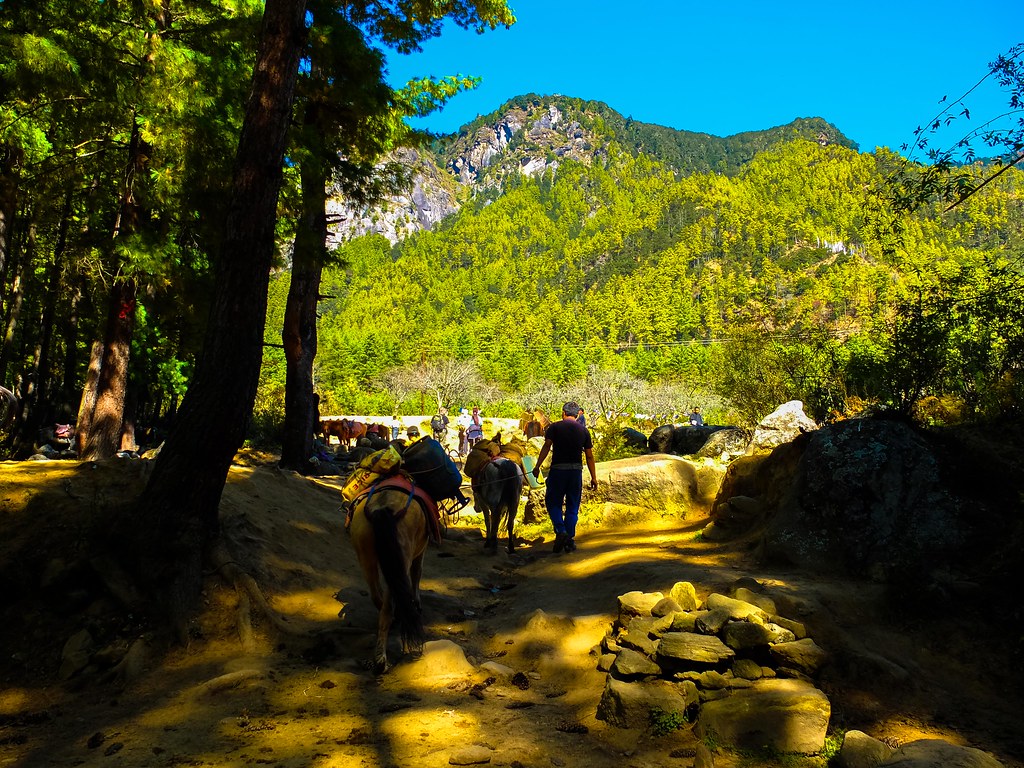 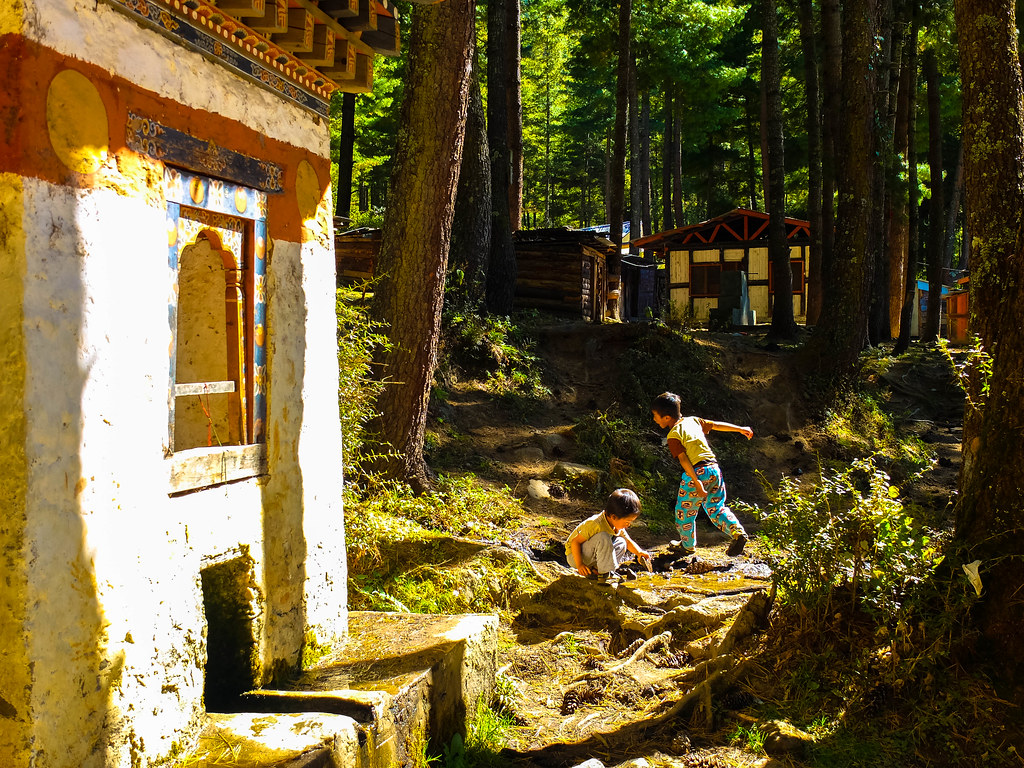 Our visit to the Tiger’s Nest is blessed with another perfect Autumn weather in Bhutan. With plenty of sunshine, the image of Tiger’s Nest from afar is nothing but picture perfect. Though, It would be nice as well to see it on a more dramatic view, perhaps a bit of rain, when it is all covered in mist and fog.

The final approach to Tiger’s nest is a series of stairs descending towards a bridge over a waterfall. From here, it is just a matter of few ascending steps and you are at the entrance of the monastery.

Shoes, cameras, mobile phones, and other electronic gadgets are not allowed inside the temple. Namgay deposited our bags on a security post and a guard patted down all visitors prior entrance, to ensure that everyone follow the rules.

Tiger’s Nest is a sacred place and visitors are expected to dress properly too, with clothes covering both arms and legs. 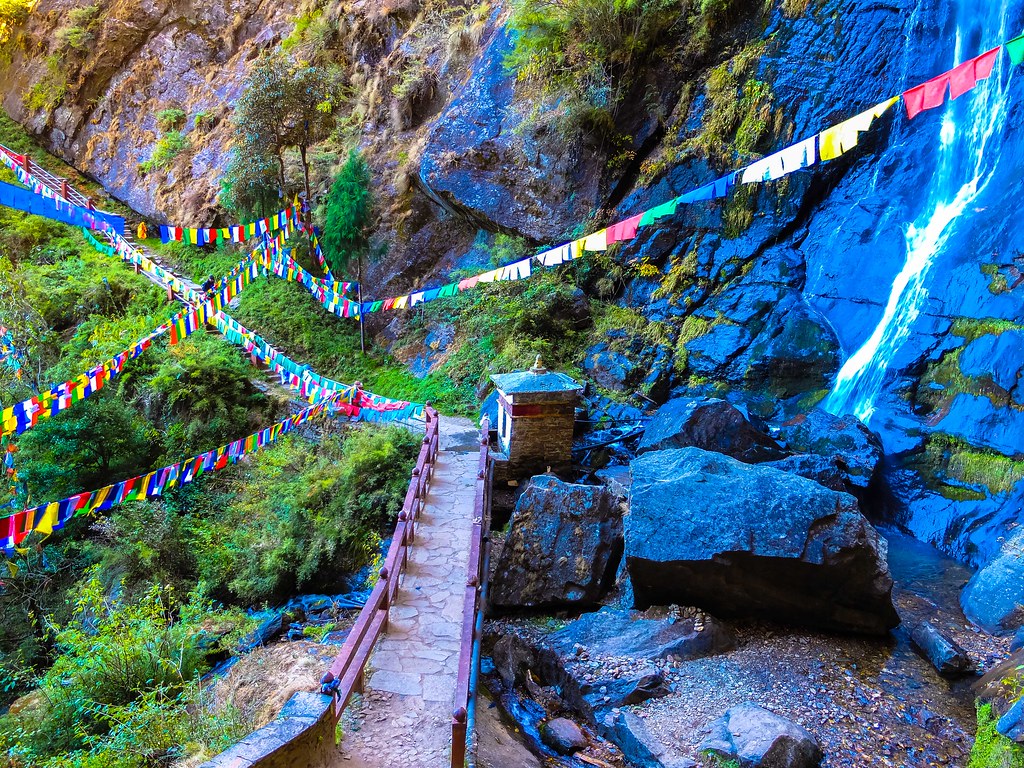 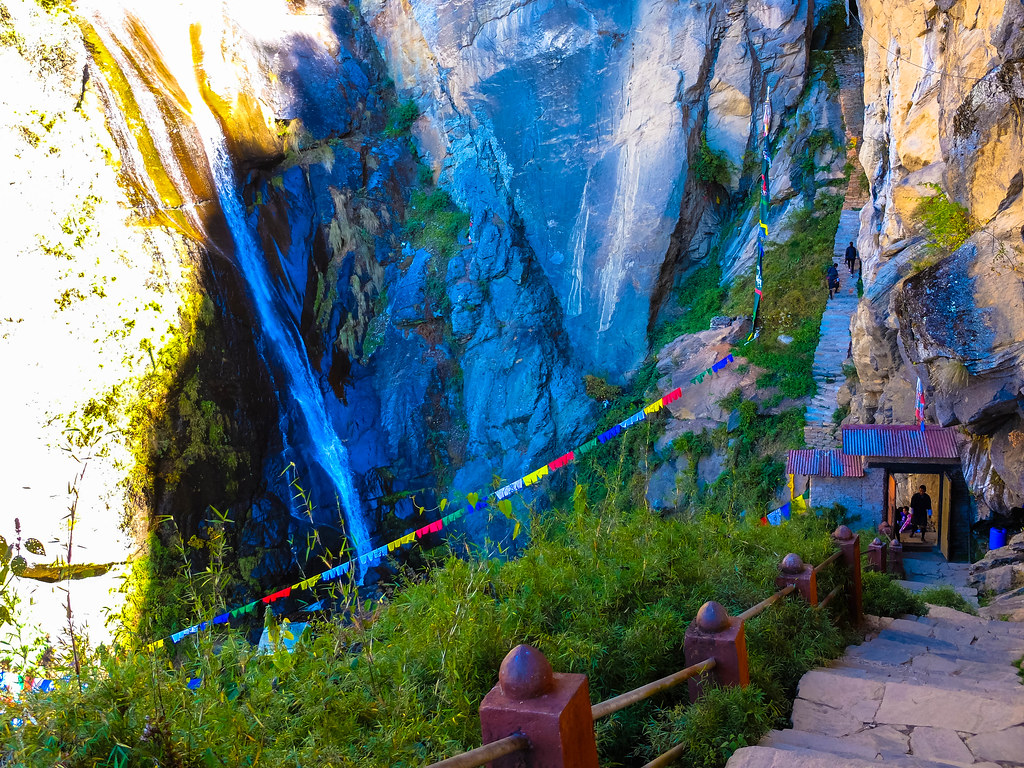 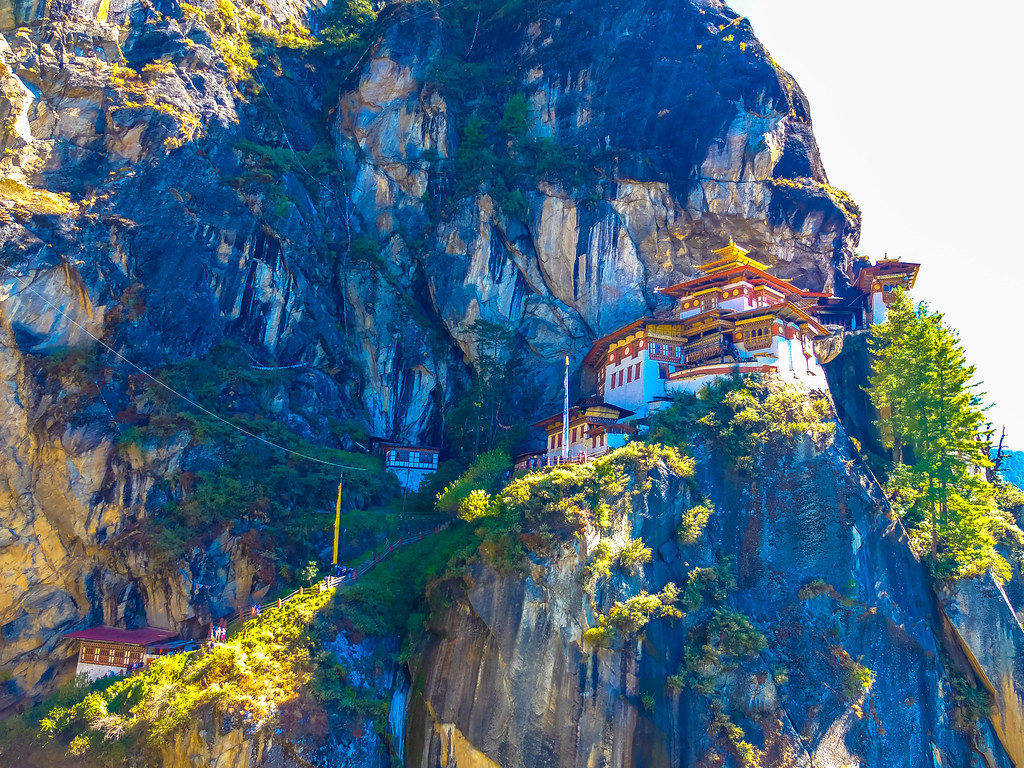 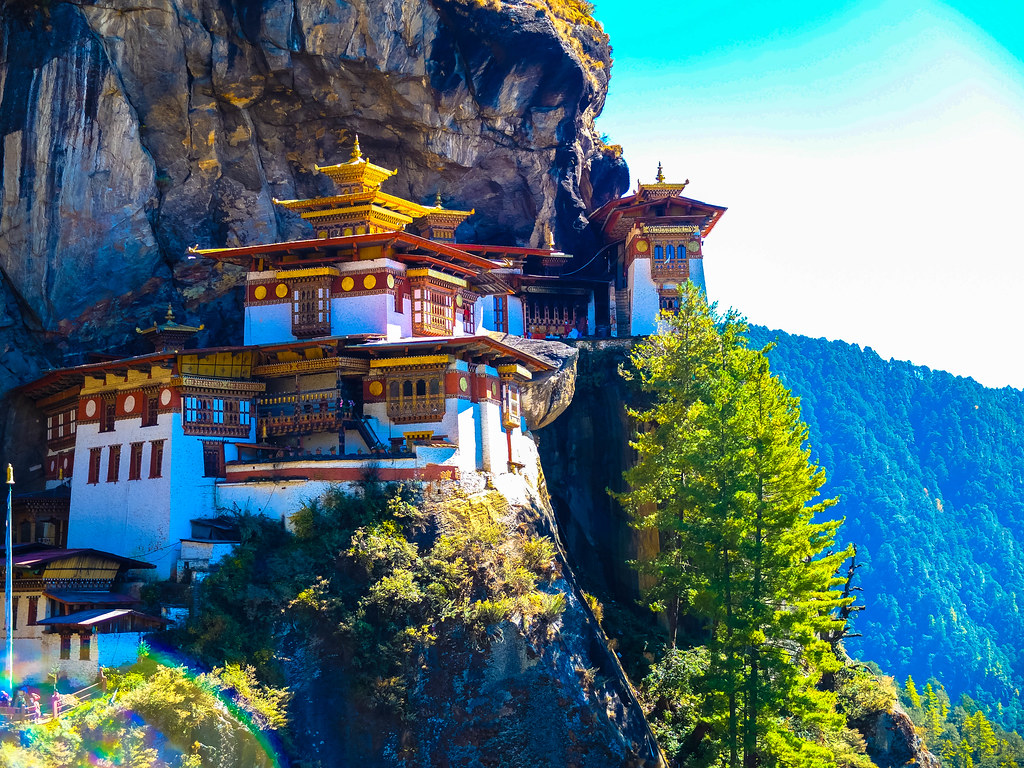 My guide, Namgay gave me a tour of the temples with Buddhist icons and decorations, while explaining the story of the Guru Rinpoche and the history of Tiger’s Nest. The best part of our tour of the complex is when we enter a chamber filled with butter lamps, I lit one, close my eyes and utter a prayer.

We asked for a string from one of the monks in a temple, a special addition to all the strings I collected from all the temples and monasteries we visited in Bhutan.

I wore all the strings I collected in Bhutan till this day.

It is a bittersweet feeling to complete Tiger’s Nest hike, for it is indeed the highlight of my tour and sadly, signifies the culmination of my Bhutan trip too. 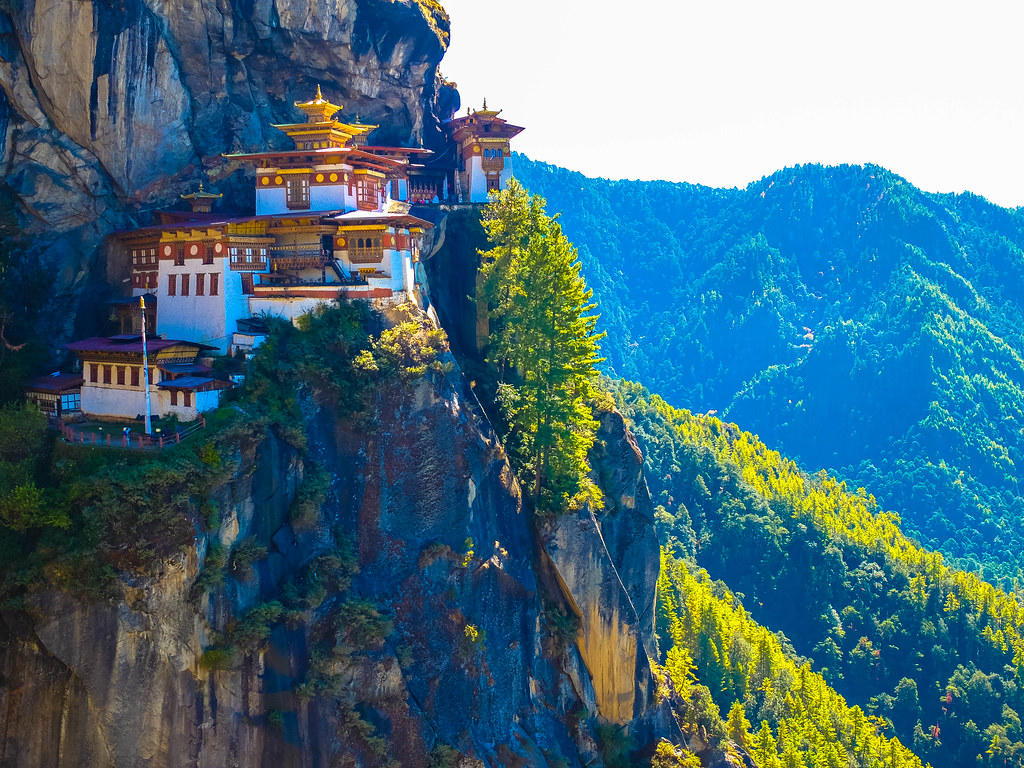 Superlative words could be easily use to describe everything aesthetically majestic or beautiful about its landscape, but what it teaches and the feeling it imparts to those who has been here is perhaps what really matters the most.

Looking back, I realized that my journey to Bhutan is truly has been more than climbing the Tiger’s Nest, and surely more than just another trip to blog about.

I would like to believe that I arrived in Bhutan as a mere tourist filled with so much doubt and uncertainty, and I departed Bhutan and returned to my mundane existence hopefully a better version of me- a little kinder, contented and happier. 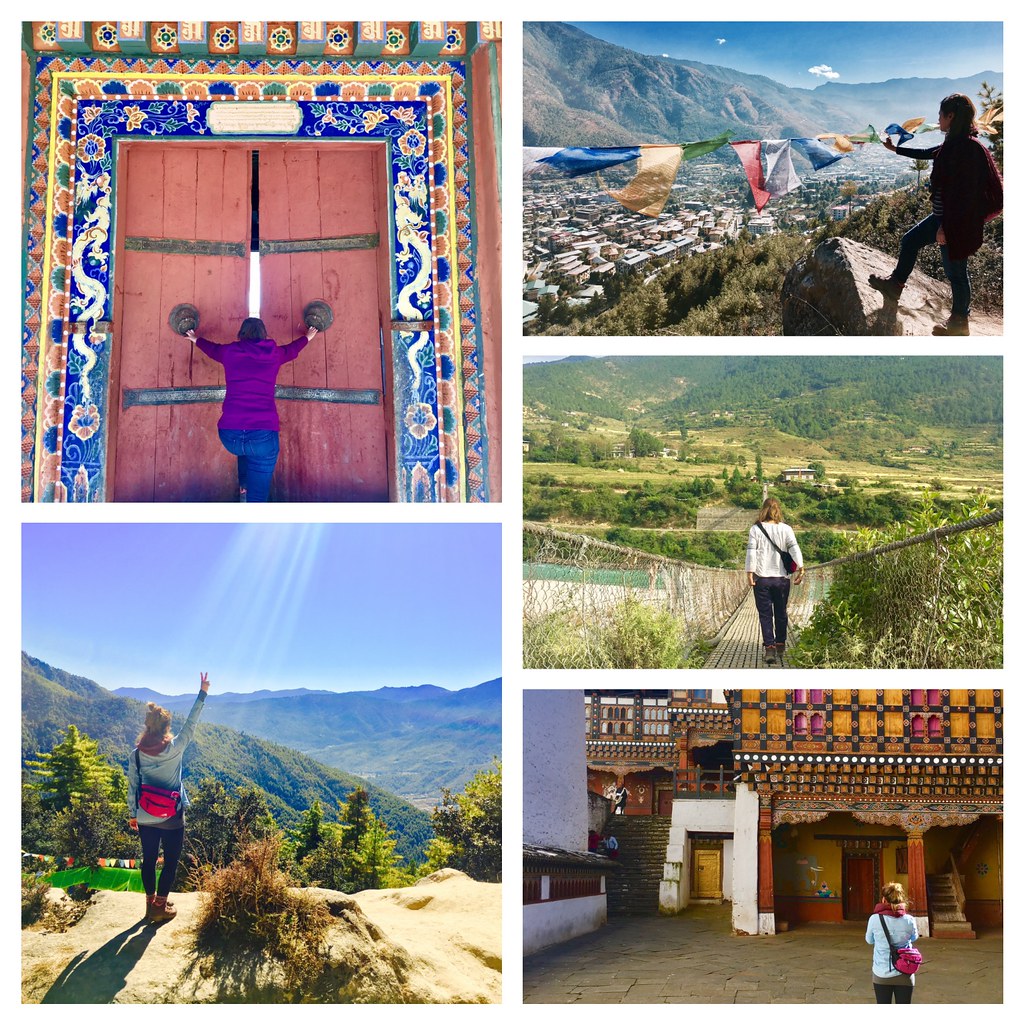