For my second day in Thimphu, we are supposed to do the usual Tango/Cheri Monastery Hike as written on our pre-arranged itinerary , but it seems that my guide Namgay has something else in mind. Instead of doing the usual round, he suggested for us to visit a different monastery and take a different route for our day hike, he promised that our detour will be more rewarding, particularly for better overlooking view of the Thimphu valley. 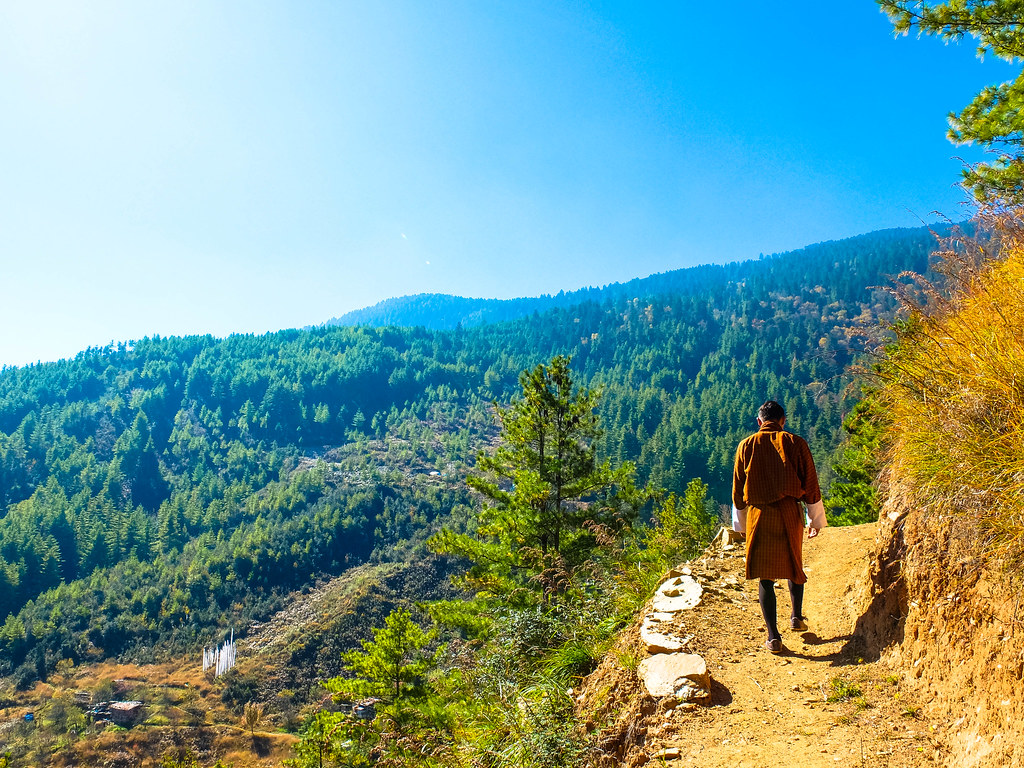 I don’t know if I’ll be missing out something if I don’t follow the tour suggested activity, but I trust that Namgay, based on his experience and possibly feedback from different visitors he guided over the years, he knew exactly the best spot in the city where visitors will enjoy and appreciate Thimphu and its uniqueness even more.

Perched on a ridge above Thimphu central downtown area, Changangkha Lhakang, with its high walls and prayer wheels, built in the 12th century, is said to be the oldest monastery in the capital city and our first stop for the day. 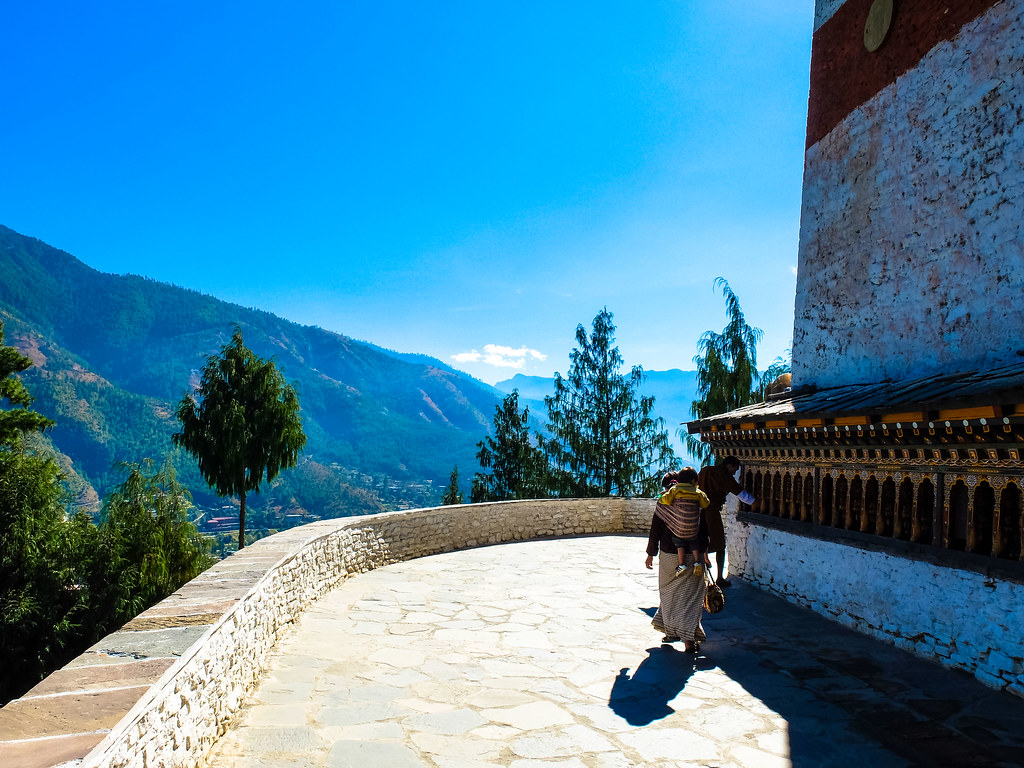 It takes an easy uphill step to reach the temple. With design possibly not as grand as the other monastery, but its significance is embedded in Bhutanese tradition. Changangkha Lhakang is where parents come with their children, to name their kids and seek blessings and protection from the deity, Tamdrin. 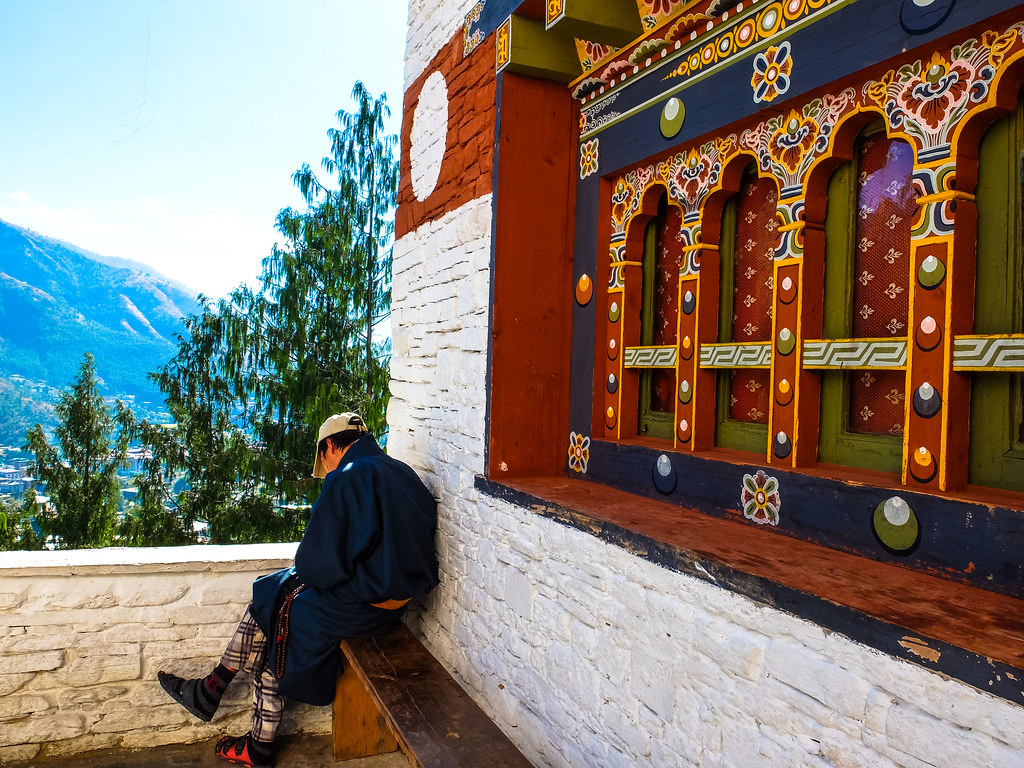 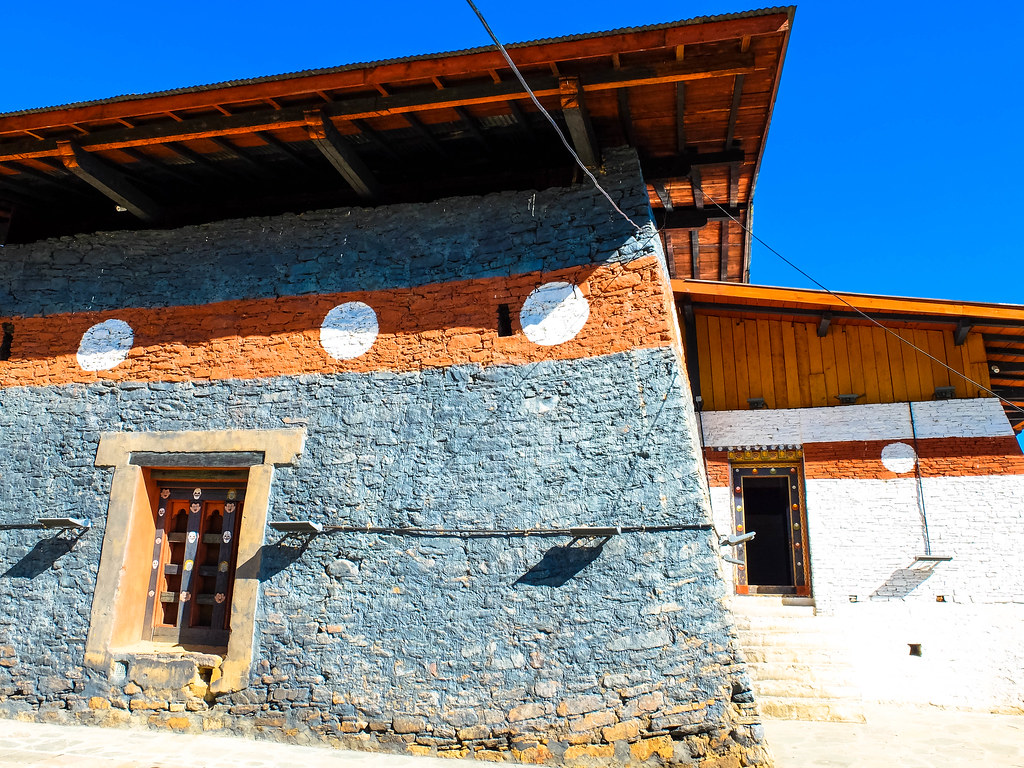 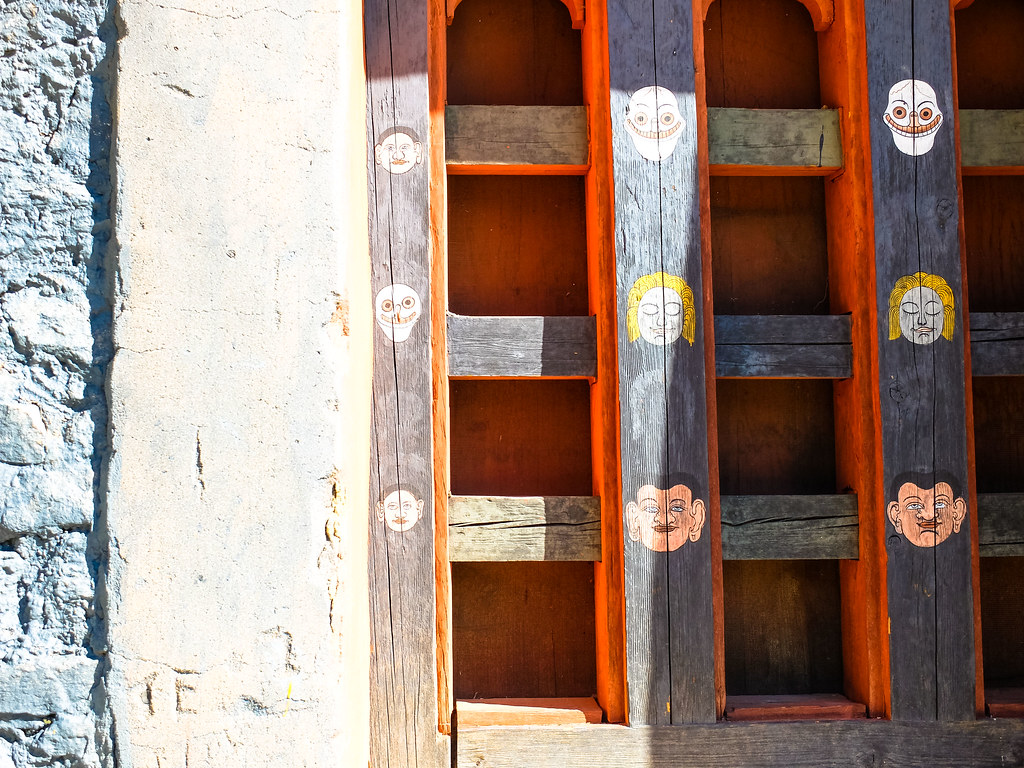 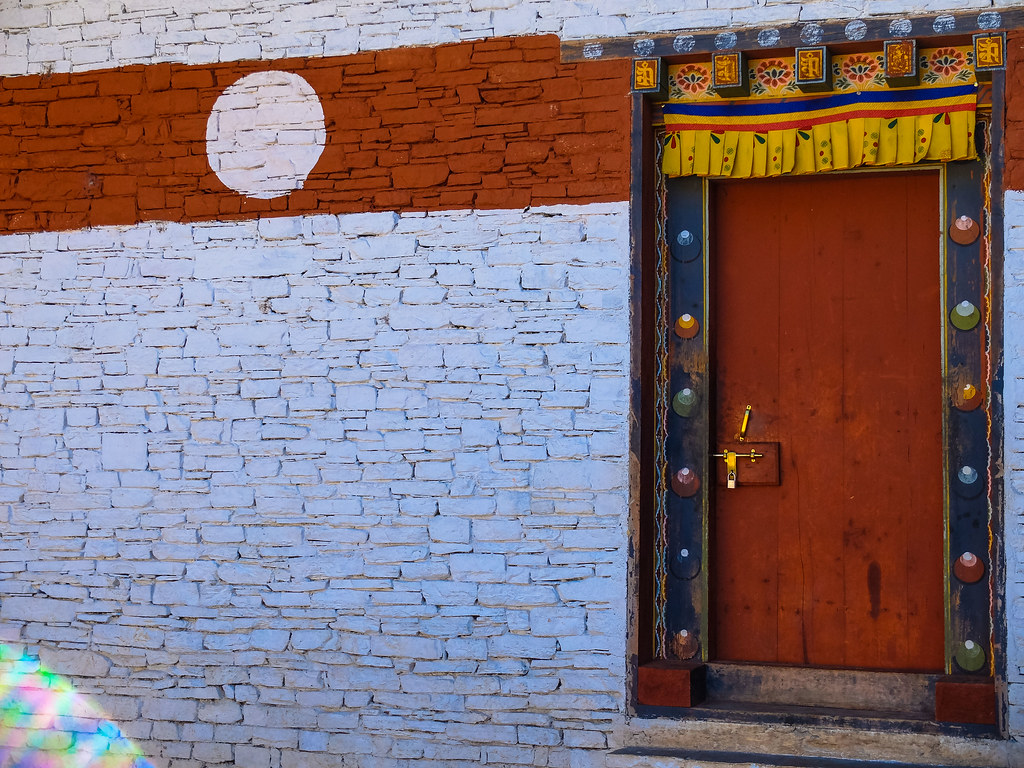 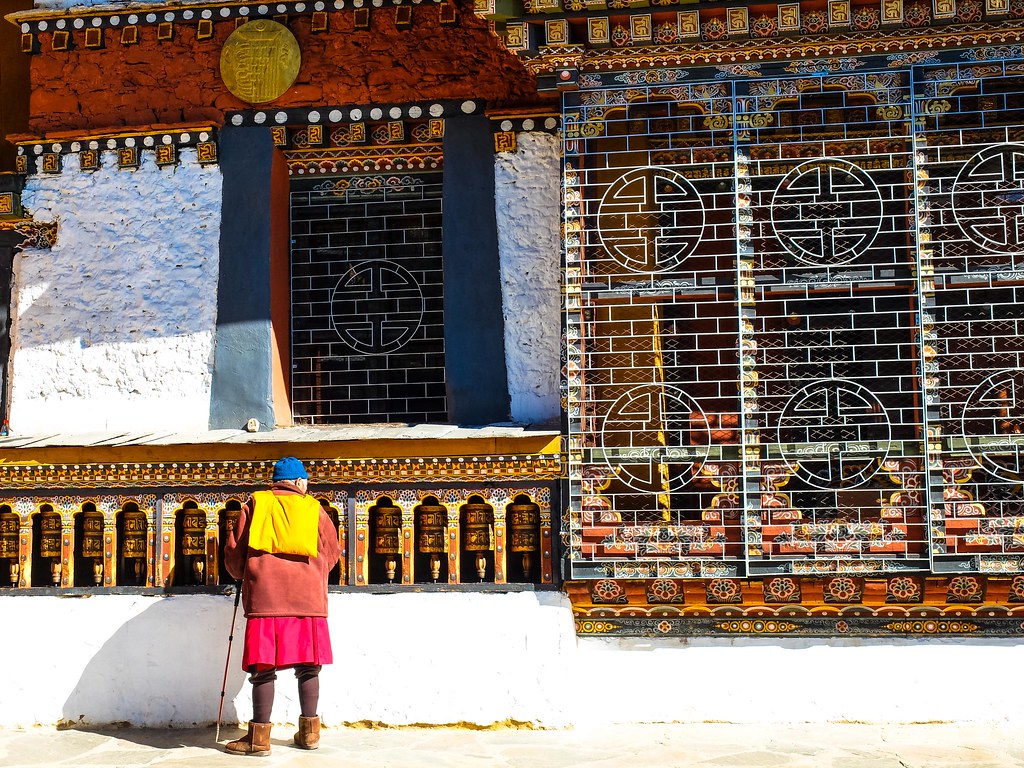 Monastery like Changangkha Lhakang is a place to appreciate the tight-knit community of the Bhutanese people, where everyone greets each other with respect and sincerity, where there is a sense of peace and calmness among the people. 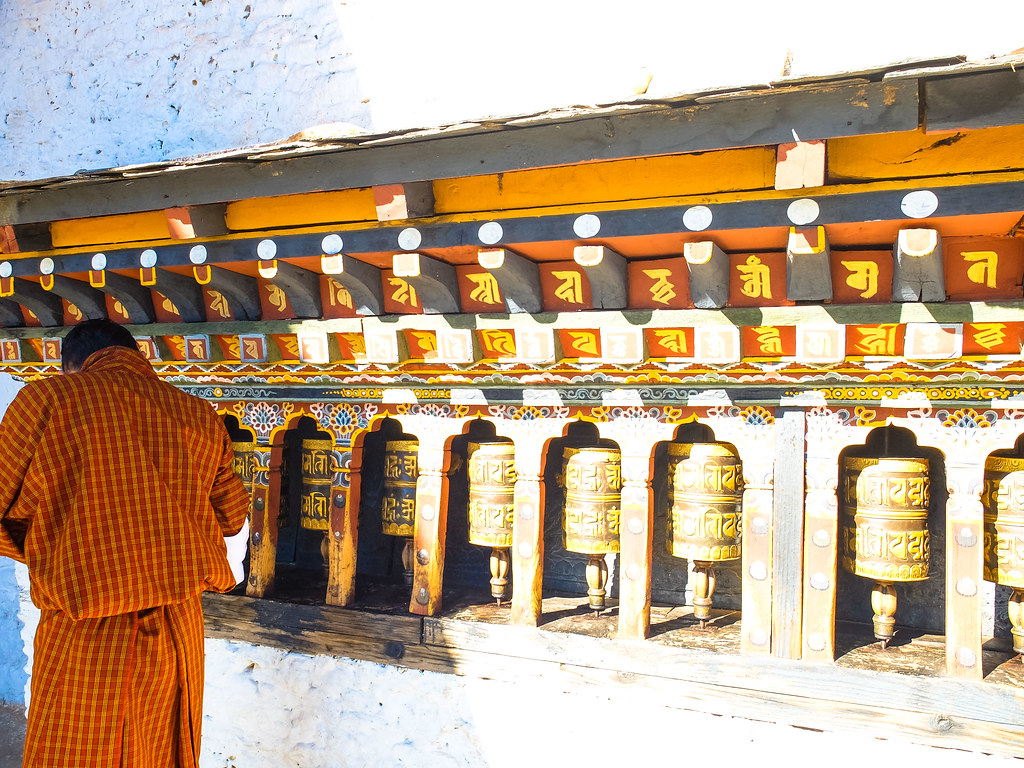 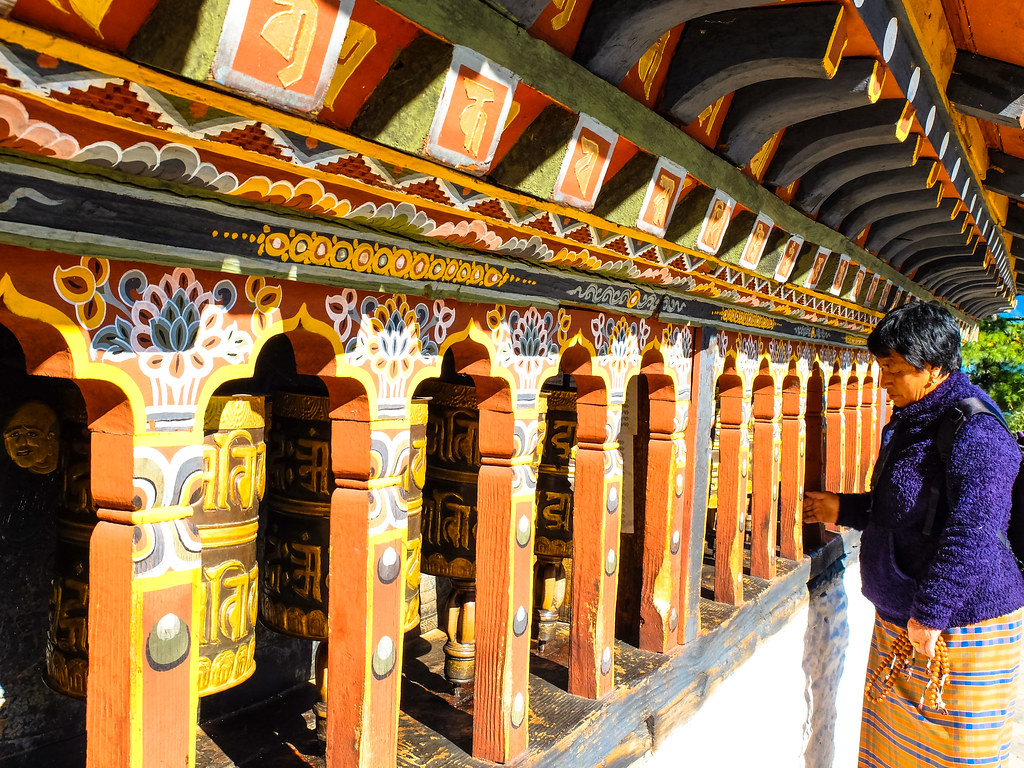 After the visit to the monastery, we started our day hike along the trail that said to be the mountain bike trail used by the King and is now part of the Kuensel Phodrang Nature Park. Since we started at the southern end most, whereby most visitors often start somewhere near the Buddha Point- the 169 foot bronze statue of Buddha Dordenma, which symbolize indestructibility and said to emanate peace and happiness for the entire world. 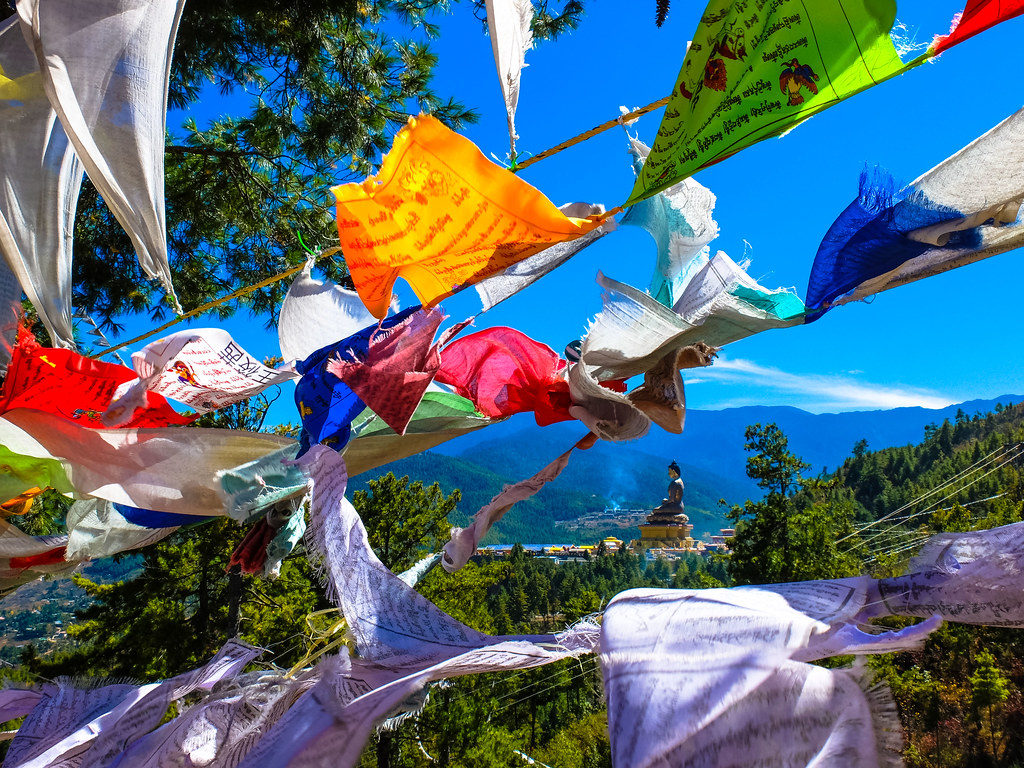 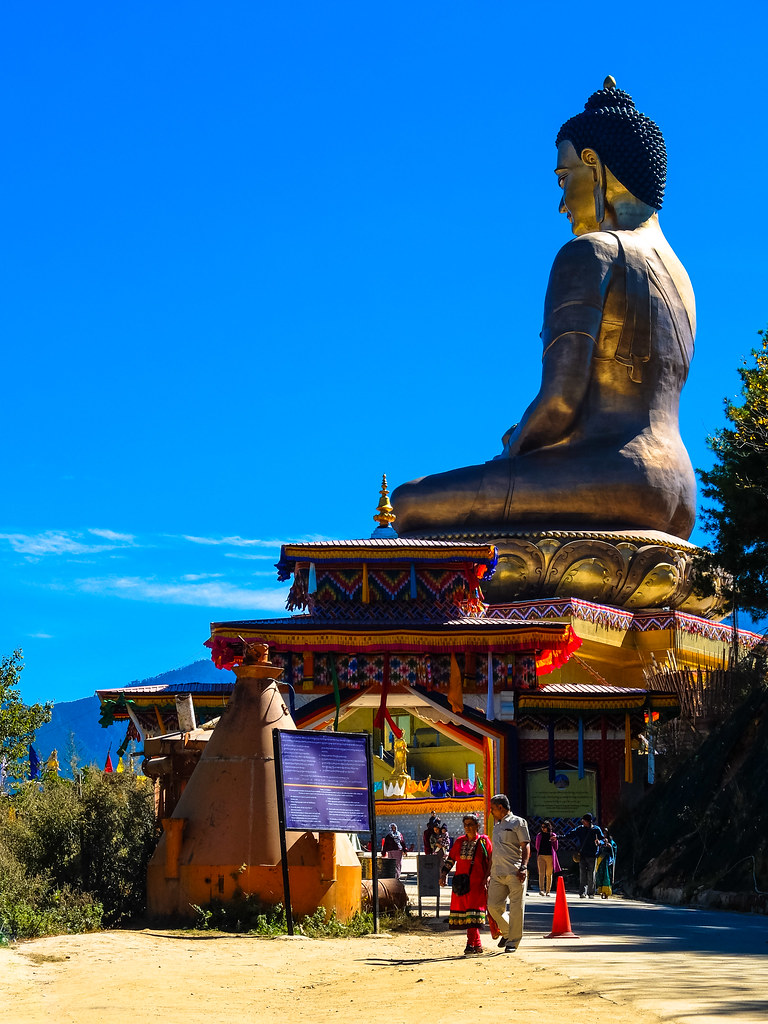 The hiking trail that we took was almost deserted. Most of the time it’s just me and Namgay, and few volunteers we met along the trail, fixing certain portion with collapsed tree branches or minor landslides. 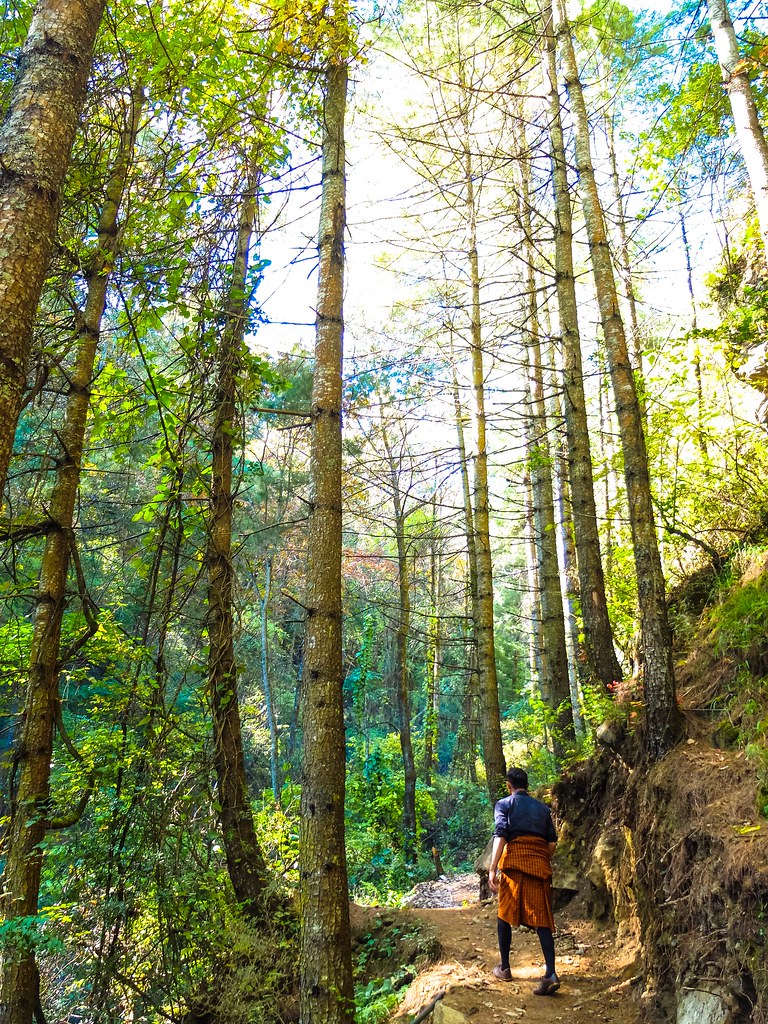 Namgay, true to his words, the view of his suggested hiking trail is magnificent. There is a point where it literally feel likes standing on top of the roof of the world, above the whole stretch of the Thimphu valley. 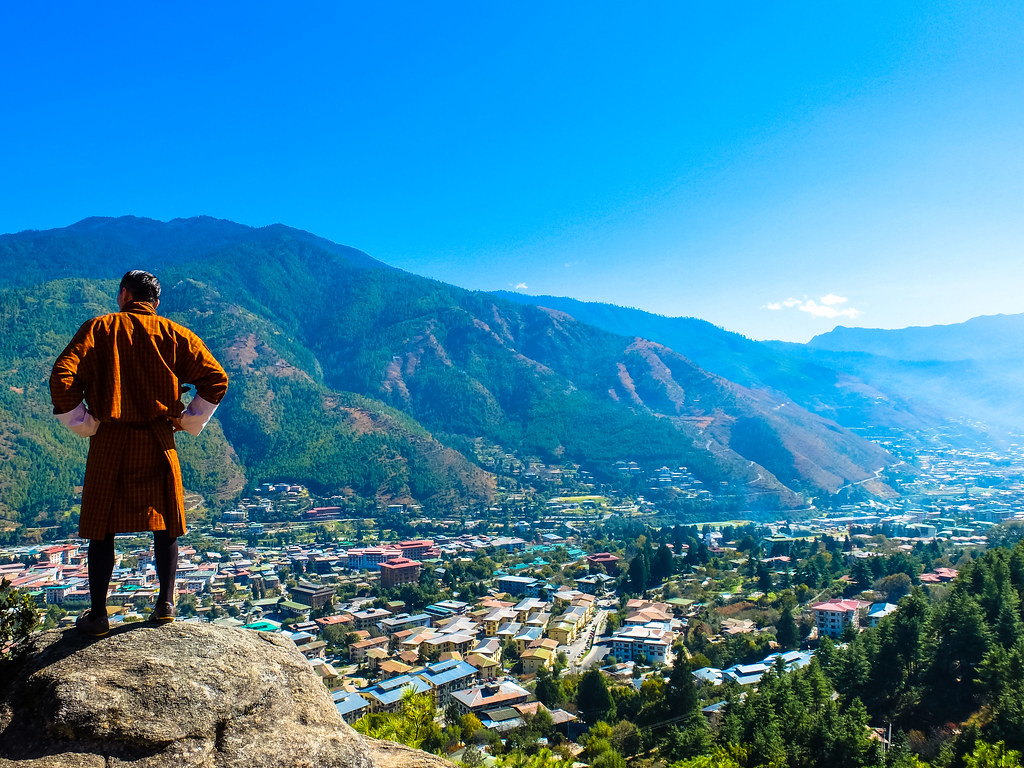 More than the familiar comfort that walking small among the towering trees never fails to provide, one thing I appreciate the most that day was the clear blue sky and the freshness of the air. 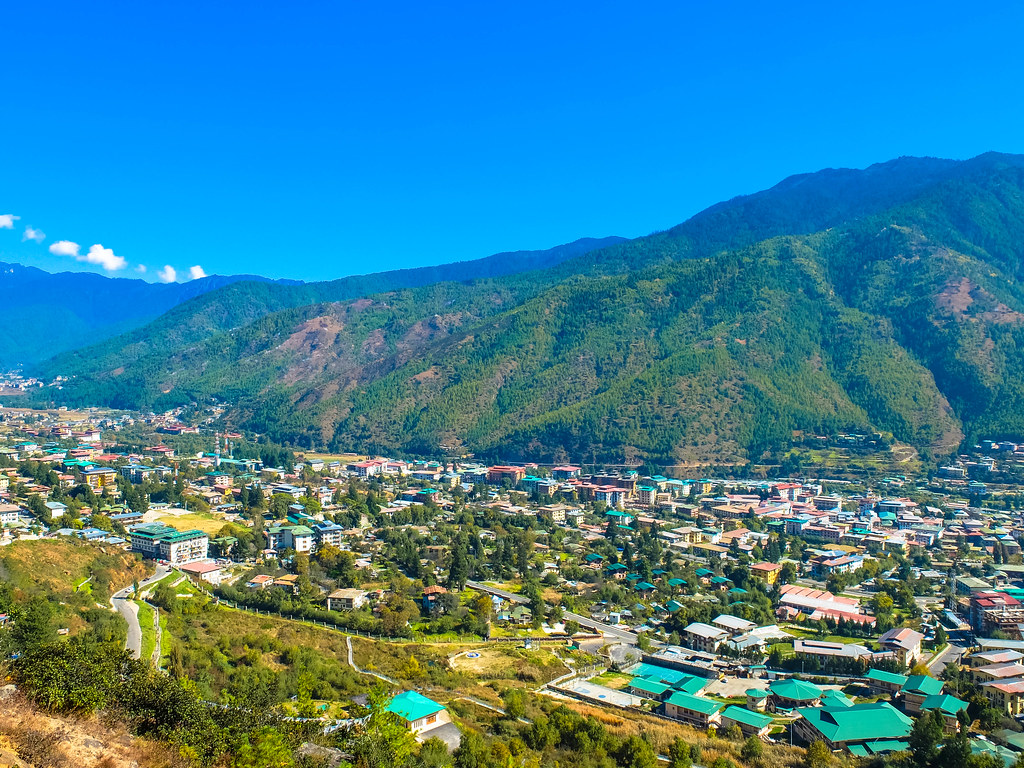 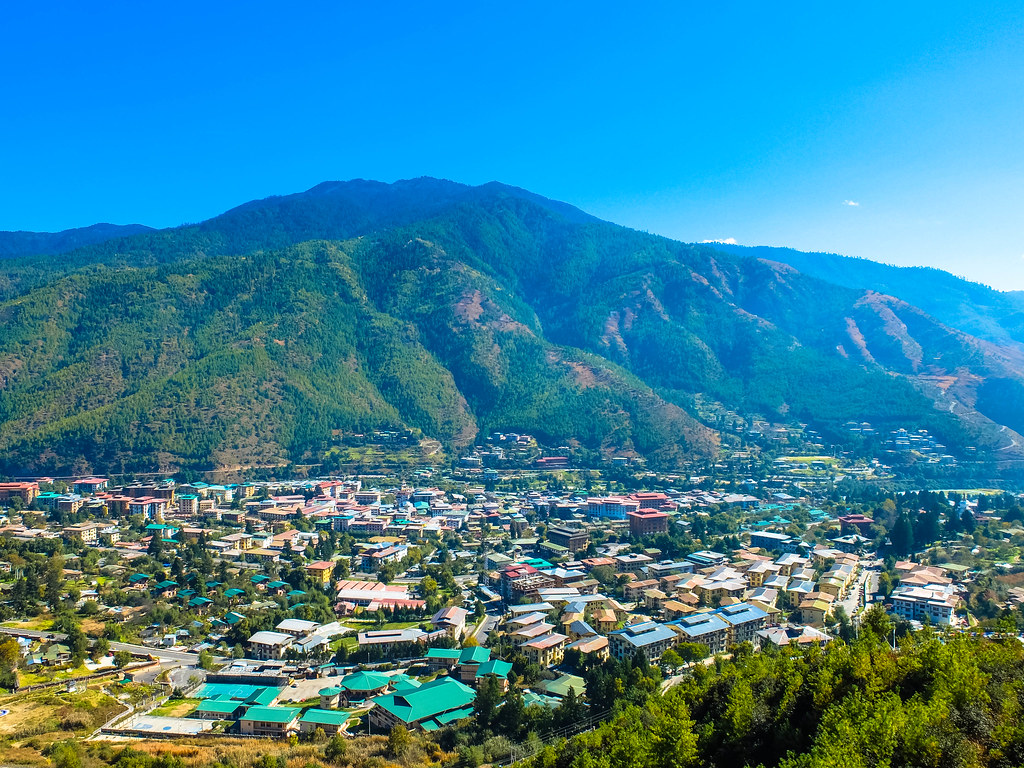 In Bhutan, where electricity comes from the fast-flowing rivers, where planting trees is a national affair, where taking care of the environment is a responsibility inherited by each citizen, and where the constitution demands that a minimum of 60 percent of Bhutan’s total land shall remain under forest at all the time. 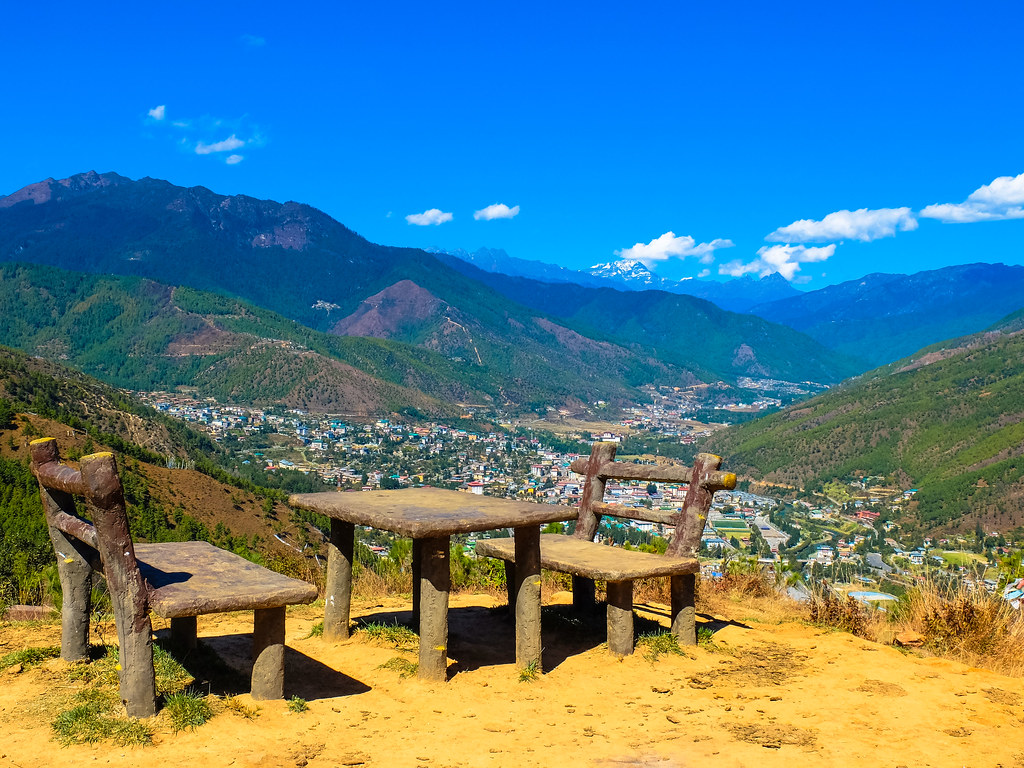 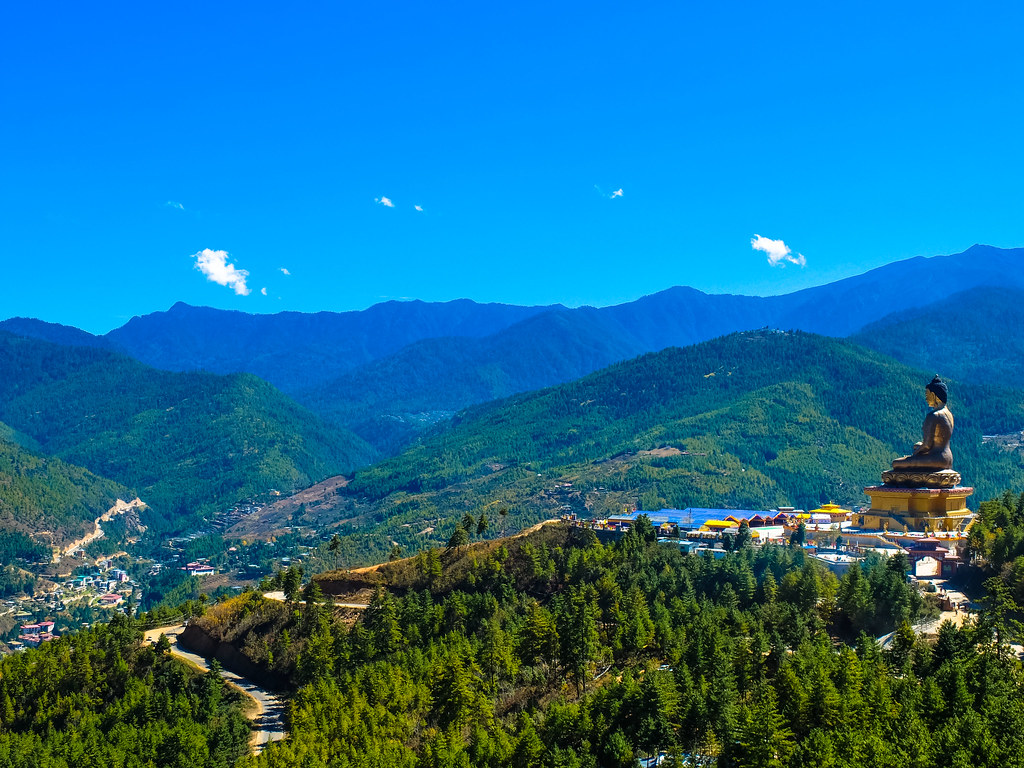 There is so much to admire about this tiny country sandwiched between China and India, two of the most populated countries in the world, and there is so much more to learn from them, and their commitment to nature preservation is definitely one of them. 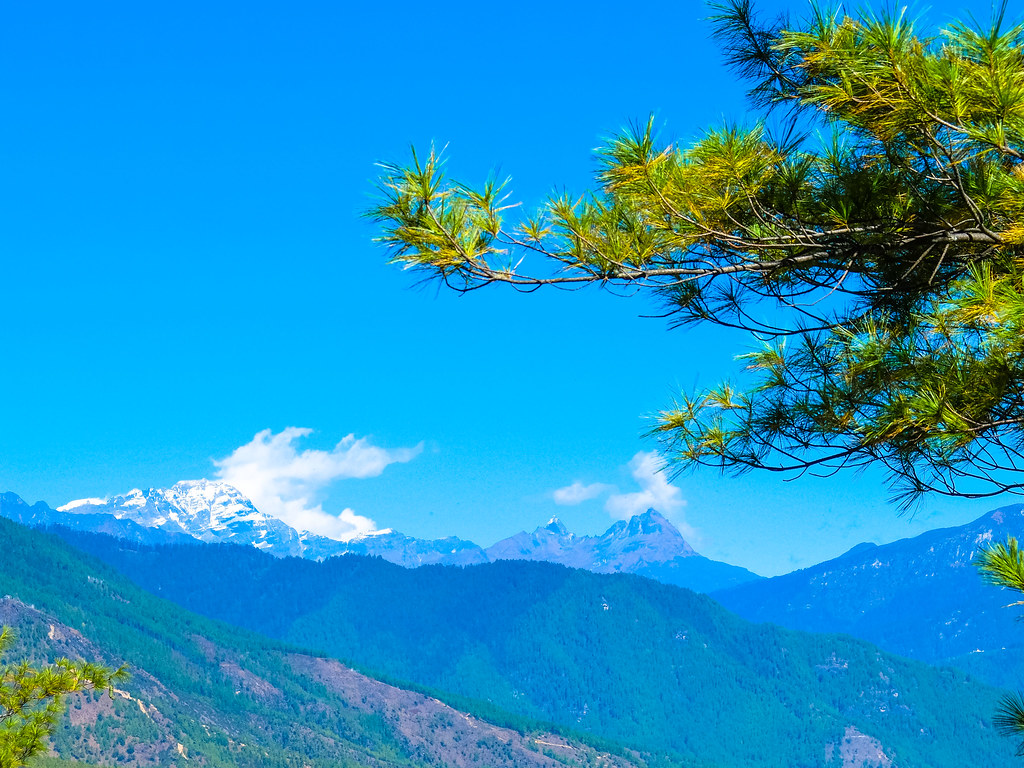